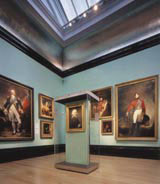 The recent show of Victorian photographs by Julia Margaret Cameron, for instance, made great use of one powerful, amazingly modern portrait that was linked across all the three design areas. ‘We may have different designers working on each of the areas, but we think out a common design strategy, common approaches to images,’ he says.

Some of this work is done by the two-person in-house design team – for instance the annual BP Portrait Awards show, but mostly it is commissioned from outside. And now comes the big one: the matter of the NPG’s overall identity. Nairne gestures towards a stack of presentation boards against the wall. ‘It will come as no surprise to you to find a director 11 months into the job with a bunch of boards exploring where we are going now. Because it is the moment to reposition,’ he says.

The boards are by Neil Svensen’s design group Rufus Leonard, and the group is thinking through ways of updating the brand and visual identity, last tackled in the mid-1990s by Pentagram. Rufus Leonard won a closely-fought eight-way pitch against some of the best-known names in the business. And while I’d be a bit cautious about a man who boasts on his website about working a 70-hour week with Sundays set aside for thinking (oh, please), Svensen is the bees’ knees as far as Nairne is concerned. He likes the ideas so far, a lot.

As all new directors do, Nairne is tinkering around with the building he inherited. For all the rationalising zeal of his predecessor, there is plenty to do, he says. ‘I’m lucky. I inherited a building that was basically done. But it’s still an intricate, complicated building,’ he says. ‘There are things I want to do, which I call the adjustments. For instance, even now, as you come in from St Martin’s Place, it’s quite dark, it needs to be lightened. And the identity work will, of course, lead us to re-do interior signage and orientation, which isn’t as good as it could be. There’s work to be done.’

Although it’s no Tate, the NPG also has its outstations – such as Bodelwyddan Castle in north Wales, where a ground-floor scheme by a rumbustious traditionalist architect, the late Roderick Gradidge, is allowed to remain although all traces of Gradidge’s entrance hall at the London NPG were expunged in the last great Dixon Jones makeover. However, go to the first floor rooms at Bodelwyddan and you find displays done by the very non-traditional architect/ artist collective Muf. It’s clear that Nairne enjoys the contrast, and intends to keep it that way.

There’s more to come. Shortly, he will be commissioning a redesign of the top-floor NPG display at Beningbrough Hall near York, the NPG’s second regional partnership. And beyond that? ‘We’re moving on from the period in which the most important thing was to get the buildings right,’ Nairne concludes. ‘Now, the next ten years is about making ourselves famous for what we do, rather than what we build. We’re developing a national policy to go beyond just country houses. We also want to be in central locations: this year we’re working in Sheffield and Sunderland, developing displays on a temporary basis. Further on, there’s an idea in my mind to develop what are almost portrait rooms around the country. It’s all about extending participation in the collection.’

Under Saumarez Smith, the NPG vastly improved its London mothership. Nairne will fine tune that while sending out shuttle missions all over the country. The National Portrait Gallery, it seems, is truly going national.