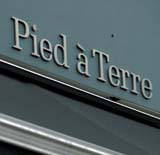 Pied à Terre, the two Michelin-starred London restaurant, re-opened last week with a more sophisticated and luxurious design, as it seeks to up the ante and win another much-coveted Michelin star.

The 40-cover restaurant, which was severely damaged by fire in November 2004, has undergone a £600 000 interior redesign by Design LSM and a brand relaunch by Wire Design.

Design LSM, the group behind the interiors of Italian restaurant chain Carluccio’s, was appointed to the project without a pitch last year. Wire Design was drafted in five months ago.

The aim of the redesign is to create a more ‘joined-up’ dining experience, says restaurant manager and co-owner David Moore.

‘We didn’t have a statement before, and wanted to step it up a notch and bring everything together,’ he says. The interior design is ‘sophisticated, sexy and moody’, he adds. The restaurant is split over two floors and also includes a private dining room. ‘The designs are not airy-fairy, but are practical approaches to create functional spaces. We wanted to create a very precious dining experience,’ Moore explains.

The identity is a modern logo depicted in Melior serif font. It features throughout the restaurant and is embossed on bespoke china plates and pressed on to ravioli and biscuits, for example.

He says it is the first time Pied à Terre has worked with an external consultancy on the creation of branding solutions for the restaurant.

Wire has also created a series of supporting graphic devices, based on garnishes and drizzles of oil, by head chef, Shane Osborn. These are ‘subtly’ applied throughout the restaurant, appearing on menus and curtains, for example.

‘We wanted to give the restaurant that extra feeling of credibility and professionalism, but without making it look like a chain. We had to integrate all aspects,’ says John Corcoran, partner at Wire Design.

Moore confirms there ‘are ideas’ to open more Pied à Terre restaurants, but he will not comment on the matter any further.