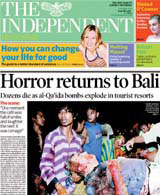 The Independent on Sunday will launch its compact edition this weekend, created under the art direction of Victor Gil, formerly a member of the design team at Barcelona consultancy Cases Associates, which redesigned the daily edition for its April relaunch (DW 14 April). The design of the Sunday edition is credited to the paper’s in-house team, though Gil was only formally appointed last week. The Independent on Sunday will be the UK’s first compact Sunday newspaper design.

Next week sees the launch of the Wall Street Journal’s compact European edition, designed by newspaper designer Mario Garcîa, who has unified the print masthead with the paper’s on-line news site, WSJ.com.

The Daily Telegraph also relaunched two of its sections at the start of the week. Its new 32-page compact sports section and 12-page business section were both designed by its in-house design team, under the direction of Daily Telegraph art director Himeshi Patel.

The Observer is planning to move to the Berliner format, recently adopted by The Guardian – redesigned in-house by creative editor Mark Porter – either later this year, or early in 2006. The paper is also working with Garcîa on the new-look format, while graphic designer Neville Brody is consulting on the redesign of the Guardian Unlimited websites (DW 8 September).