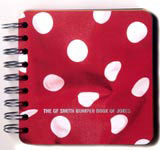 The GF Smith Bumper Book of Jokes was designed by Pre Consultants for an event that took place at the beginning of July run by Amanda Hallam, graphic art consultant at GF Smith. It is bright and bold and conjures up images of children’s storybooks and circus clowns with its red-and-white polka-dot cover and coloured pages with silver and glittery type.

For the first time this year the consultants at GF Smith have been given a budget to run an event of their choosing and Hallam says she wanted to do something fun for all her favourite designers. So in consultation with Pre she came up with the idea of hosting a comedy evening and they decided the ideal accompaniment was a book filled with jokes from designers, of which 500 were initially produced.

They chose the Colourplan range of paper, partly on the basis that it was good for the design and partly because it was a paper GF Smith wanted to ‘bring to the fore’. The book is made up of 18 ring-bound 129mm by 129mm pages, which each consist of two 270gsm sheets duplexed together with the corners rounded. The main idea was to show how flexible the paper was and how wide the range, so they used 13 different colours and 17 different types of embossing, which range from wire through to leather and matrix. Asking designers to contribute jokes was a way of getting them involved.

Pre got the job in December 2000 and spent two to three weeks putting it together. Pre designer Paul McLoughlin says, ‘It was a really good job, mainly because you don’t have a budget to stick to. We kept the design quite simple, just lettering, and worked closely with the printers (Benwell Sebard Limited). They used a specialised print process for the foiling, as we were seeing what we could and couldn’t do with the different sizes of font and types of embossing.’

Lime brands The Old Market after a revamp