The so-called “Avengers of Hip Hop” assembled last weekend to perform at this year’s Super Bowl half-time show. Dr Dre, Eminem, Snoop Dogg, Mary J. Blige, 50 Cent and Kendrick Lamar all took to the stage, performing to a crowd of 70,000 at California’s SoFi Stadium and an estimated 100 million worldwide.

The music legends performed on a stage developed by British set designer Es Devlin. This is not the first time the designer has produced work for the Super Bowl – she was the creative director of last year’s performance from The Weeknd, which featured a famously intricate set design.

With so many stars in this year’s half-time line-up, giving each enough space to perform was a necessity. The solution which Devlin and her team created aimed to segment the set into a series of important buildings, in the process building a “composite Compton Street”. You can view the performance here. 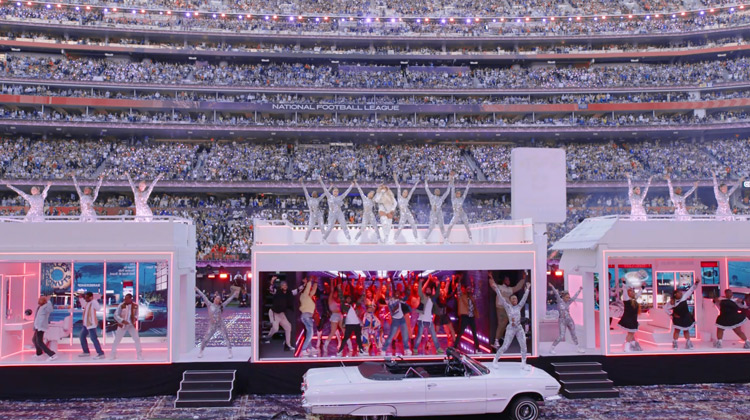 “A narrative art installation as well as celebratory performance”

Devlin explains that in her studio’s first meeting with Dr Dre – real name Andre Romelle Young – she showed the performer previous examples of her work. She says he was particularly drawn to Devlin’s installation pieces, more so than her set design work.

“Dre has just had his portrait painted by Kehinde Wiley for the Artists Inspired by Music: Interscope Reimagined exhibition at LACMA and he was interested in approaching the Super Bowl project as narrative art installation as well as celebratory performance,” she says.

Beyond Dr Dre’s preference, she says the team understood the half-time show would be taking place in daylight this year rather than at night – so an installation or sculpture-led show would likely be more well-suited than something reliant on lots of lights. 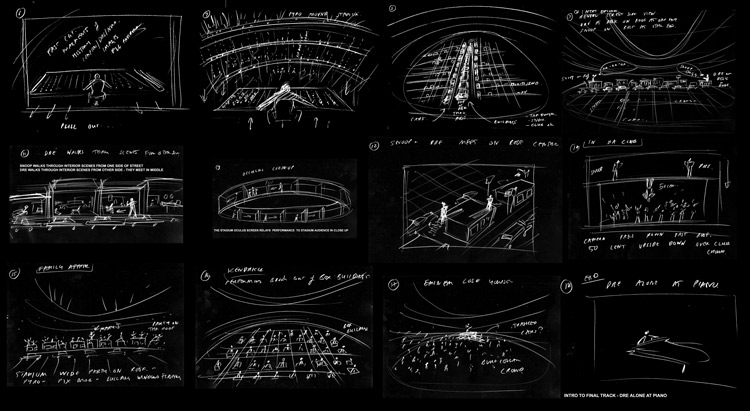 “The recording studio is Dre’s link and meeting point”

With the event happening so close to Compton, the home of West Coast rap, Devlin and Dr Dre settled on the idea of the city being yet another star in the already-studded show. The stadium floor cloth was printed from high-resolution aerial photographs of Compton which Google Earth supplied to the team. Further detailed photos were taken by a local helicopter pilot.

In the centre of the aerial map sat a line of buildings, which each boasted a significance to one or more of the performers. The details of the buildings were “unified by their tone”, Devlin says. “Bone-coloured shades of stone, pale grey – they were like neon lit museum pieces to be remembered as a series of forms and frames for the human story within them,” she explains.

Dr Dre’s recording studio was placed in the centre. “The recording studio is Dre’s link and meeting point with all the other artists,” Devlin says. “Much of the lived experience which informs the music heard during the show has passed through Dre’s desk and hands.”

The other notable buildings and structures found throughout the performance included Tam’s Burger #21, a restaurant cited in performer Kendrick Lamar’s song Element; the Martin Luther King Jr. Memorial built by architect Harold Williams in collaboration with Canadian sculptor Gerald Gladstone; and the Compton Courthouse which features in the film Straight Outta Compton. 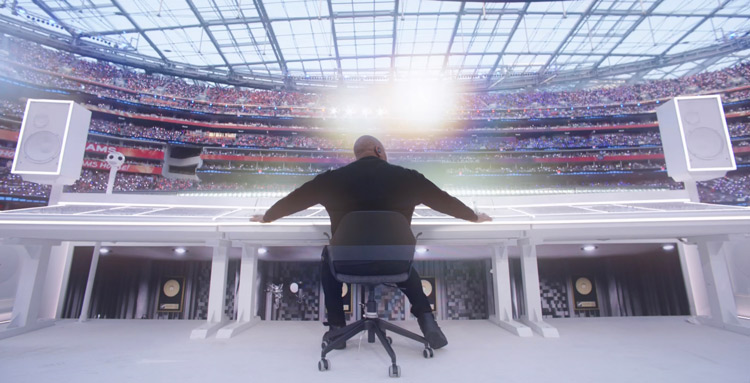 “Throughout the show the occupants of the house evolve”

Each of the buildings was used differently by the line-up of artists throughout the 14-minute performance. At all times, each space was lively and filled with action, giving the impression of several convening parties coming together.

For example, rapper Eminem began his set within the Courthouse with Dr Dre listening from his recording studio. Eminem eventually busted out of the building, sending pieces of it flying, and made his way to the recording studio installation, joined on the drums by Anderson .Paak.

Snoop Dogg began his set on the roof of a Compton house. The house was a bungalow-style building commonly found in the South LA area. As Snoop made his way down a set of stairs into the home proper, the “living room” was filled with his family photos. Devlin explains this was a dynamic space which adapted throughout the performance. “Throughout the show the occupants of the house evolve – first the band, then joined by Mary J. Blige and 50 Cent sitting on the sofa,” she says.

At one point Dr Dre’s rooftop recording studio platform descended, giving a view of Eve After Dark, another LA landmark. The club has a backroom studio in which the artist recorded Eazy E’s Boyz-n-the-Hood – what Devlin says is “arguably the first ‘reality rap’ track”. 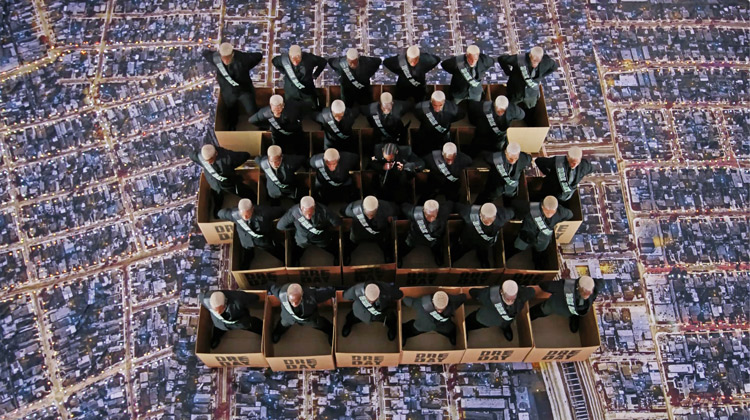 “A contemporary artist paying tribute to the generation that precedes him”

Beyond the buildings and flooring, smaller inclusions to the show aimed to further illustrate elements of West Coast life, both past and present. The Compton Cowboy, a central part of African American cultural history in the city, appeared in subtle ways throughout the performance. Snoop Dogg walks past one as he passes through Tam’s Burger during the Dre song Next Episode, on which Snoop features, Devlin explains.

Meanwhile lowrider cars circled the buildings. “The lowrider originated in the post-war 40s and 50s – Mexican-American war veterans, using engineering skills from their war years, adapted their cars to differentiate them from the ‘hot rod’ classic cars modified for speed,” Devlin says, adding that they are a “central part of Compton culture”.

And when Kendrick Lamar entered the performance, it was with an “army of men bent low in a grid of cardboard boxes”, Devlin explains. “Cardboard architecture on the street is an apt evocation of LA in 2022,” she says, “However the tone here is also celebratory as these boxes are branded, along with their inhabitants’ costume sashes declaring ‘DRE DAY’. This is Kendrick Lamar – as a contemporary artist – paying tribute to the generation that precedes him.” 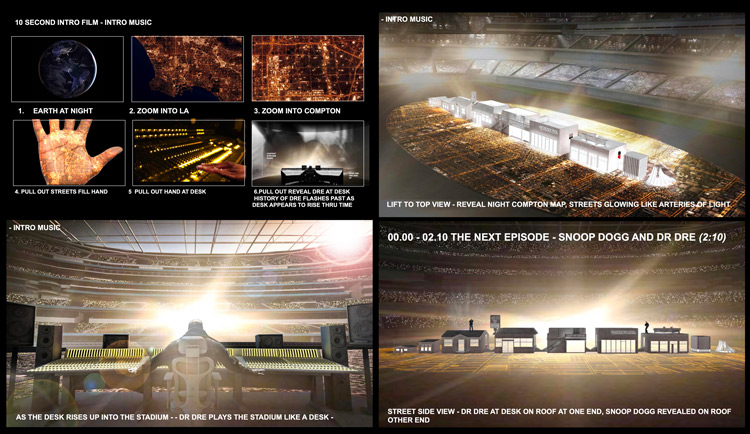 As with every half-time show, one of the defining factors of the stage was its assembly. There is only a short window of time where the stage – which sits on top of the American football field itself – can be assembled, performed on, and then disassembled. All in, it’s about 30 minutes.

Bruce Rogers, the “veteran” production designer for the Super Bowl, helped make this possible. “He masterminded the design to be able to appear within eight minutes and disappear within six minutes – an immense challenge requiring military precision and crew choreography,” Devlin says. “The set-up is in fact a show in its own right: We noticed very few of the audience leaving their seats: all stayed to watch the intricately staged crew performance.”

In case you missed the halftime show, here’s the whole thing: pic.twitter.com/ohtVYng482

What did you think of the Super Bowl half-time show? Let us know in the comments below…

Designing the brand for new Black-led media company Capital B