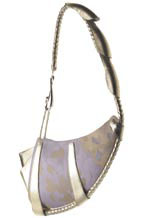 Garrard, the British jeweller and house of the Crown Jeweller, is displaying seven items designed by Royal College of Art students at its flagship store located in central London, following a competition to create a luxury item that would appeal to Garrard’s clientele. The brief was to create an object that had to be produced commercially, which could be used either for functionality at the home or for personal adornment. The designs range from coasters (right) by Carla Nuis to a bag (left) by Barbara Paleka. The winner will be announced on 15 April and takes home a £4000 prize.