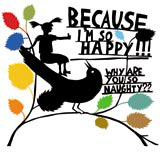 Ryan suggests his constant enjoyment of experimentation is rooted in the freedom he enjoyed during seven years of education – from a foundation in Birmingham to a fine art BA at Nottingham Trent Polytechnic, then three years of printmaking at the Royal College of Art. ‘It enabled you to experiment and be playful in a way that’s impossible now,’ he says. And it’s there in everything he’s currently working on or developing: from the cut-outs turned into appliquÃ©, handmade for US fashion design group Project Alabama, a product range for the massive Sazaby company in Japan that includes bandanas, scarves and bags, and the products and printed matter he produces for independent design shop Shelf in London’s Shoreditch, including prints, hand-painted wall tiles, cards, iron-on transfers, egg-cups and gorgeous printed storage boxes.

So need he worry about what might happen if the cut-out bubble bursts? ‘Paper-cutting might become too familiar as you see more of it, or I might get bored with it, but that’s OK. I’ll move on to something else,’ he says simply. In fact, signs of something else are already appearing in the studio, where a gouache sketch for a series of prints fills a wall. It’s beautifully coloured, with a feel of 1950s fabric design.

‘I want to do some new prints and that’s a starting point, or I could decide to print some ceramic inks on to transfer paper and do some plates in the kiln downstairs… There’s always loads of stuff to do, isn’t there? So many millions of things to do. It’s constantly exciting being in that position, working with different materials on different projects,’ he says. But the one project on the immediate horizon that’s giving Ryan real grief is, unsurprisingly, a writing deadline for a forthcoming book of short stories by 15 artists. ‘It’s something I really, really want to do,’ he says, ‘but it’s so hard.’ While Ryan might use words, his expressive, highly charged relationship with them results in, above all else, the best form of visual communication.