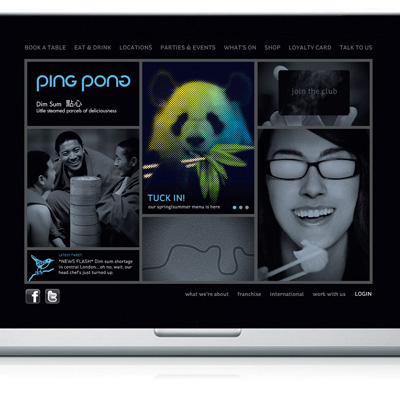 D Studio is implementing a brand repositioning for Ping Pong after being appointed as brand guardian for the dim sum restaurant chain.

Ping Pong was founded in 2005 and has 12 outlets in London and three overseas – in Washington DC, São Paulo and Dubai. D Studio says the brand has plans for further international expansion.

D Studio was appointed following a four-way pitch in November, according to the consultancy’s creative partner Phil Curl.

The consultancy says, ’Since its launch, the brand remained static for a number of years before it started to lose its way and become fragmented.’ D Studio says it won the pitch with its plan to ’inject a playful edginess’.

Curl says that when the brand first launched it had a strong design ethos. ’We’re looking to get back down that route,’ he adds.

The consultancy says it is looking at every aspect of the brand, with the exception of the logo. D Studio’s work will cover typeface, tone of voice, photography, illustration, audio, video and restaurant interiors.

Curl says, ’Essentially, the core element is the idea of “China with a twist”. We’re aiming to get that concept through and also trying to get the whole tone of voice more forward-looking.’

He adds, ’Previously, the tone of voice had read a bit like a marketing handbook. We’ve tried to give it a more natural, fluid voice.’

The first project to roll out as part of the brand refresh will be Ping Pong’s website, launching this week. D Studio says the design of the site ’takes inspiration from the Chinese lattice-work that’s prominent in each of Ping Pong’s restaurants’.

The consultancy will initially work on print campaigns and other touchpoints as part of a one-year contract.

Small Back Room picked as Nigerian bank reinvents itself