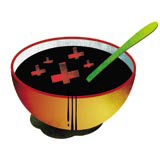 While many designers have probably experienced a less than enthusiastic reaction to a piece of their work, few will have considered that the objects they create could be downright dangerous to our health.

But according to organisations such as Friends of the Earth, World Wildlife Fund and Greenpeace, much plastic packaging and many everyday products are contaminated with risky chemicals. Everything from baby bottles to carpets, computers and cosmetics have been identified as potentially harmful.

Last month American scientists established that materials commonly used in toys, cosmetics, packaging and other plastic products contain chemicals that can be related to reproductive problems in boys. Known as phthalates, these chemicals were found to have gender-bending effects on unborn baby boys, even in tiny quantities.

Two other, separate, research projects found that a chemical called bisphenol A could increase the risk of breast cancer and could be linked to recurrent miscarriages. Bisphenol A is widely used in plastic containers, cans and dental products.

Some retailers are responding to growing consumer anxiety about the issue. In March, Marks & Spencer launched a range of cleaning products, Naturally Inspired, which avoids phthalates and other ‘chemicals of concern’. It also phased out PVC packaging – one of the most contentious materials (see box, top right) – three years ago.

Ikea has banned products containing brominated flame retardants – another controversial chemical – and Nike, usually the pariah of the anti-corporate lobby, openly lists its desire to ‘eliminate toxic substances’ among its business objectives.

The company is working to remove PVC from footwear, it is looking at eliminating toxic chemicals from its rubber products and has cut the use of chemical solvents by replacing them with less toxic, water-based adhesives.

‘Designers should consider the materials they’re using,’ he says. ‘Up to 80 per cent of the environmental impact of a product is determined at concept stage. We need to work with clients as early as possible and design with an environmentally friendly ethos from the very beginning.’

Brown agrees it’s hard for designers to avoid plastics, but maintains there are times when alternative materials can be used – for example, replacing plastic with cardboard.

The growing field of Green chemistry is also beginning to provide alternatives for designers who want to avoid materials that incorporate potentially toxic chemicals.

According to John Whittal, technology translator at Crystal Faraday, manufacturers and engineers are now developing materials that are bio-based in origin, rather than chemically manufactured, and have much lower environmental impacts.

Materials such as cellulose, made from plant materials; starch, primarily composed of maize; and lactic acid, which is made from fermented maize, are all viable alternatives to plastics that come from non-renewable materials. Starch, for example, can be used to create plastic bags and trays and lactic acid has similar applications and can even be spun into clothing.

The problem is, says Whittal, that these developments are ‘isolated from the latest consumer and design trends’. Designers, in other words, need to begin to educate themselves about some of the options that are becoming available.

And it’s not just about new materials. There’s a change in thinking needed too. Brown advocates designers adopt a more holistic ‘life cycle’ approach that looks at the impact of a design from manufacture through distribution, retail, use and disposal.

‘It’s how we make the product, how we build it, how we source the materials. We’re adding more criteria to the design process [but] still need to deliver great comfort, fit and aesthetics,’ he says.

He points to the company’s Considered range, which focuses on eliminating waste and toxic materials, using less energy and improved recyclability, as an example of the team’s thinking.

Conran & Partners creative director Sebastian Conran sees this approach as the way forward. ‘Traditionally, our concern has been with the here and now and issues of functionality, usability and appeal have taken priority. Now at last we are looking at value from a more global perspective and including rather more important issues, such as provenance and future impact,’ he says.

With a swathe of research projects currently underway, the issue of toxic chemicals in our products is likely to keep hitting the headlines. And scientists remain split on the issue of how harmful these chemicals and materials are.

Alan Boobis, professor of biochemistry and pharmacology at Imperial College London, believes small doses of the chemicals in question are unlikely to harm people.

‘It is not realistic in the modern urban environment to ban these chemicals, unless we want to return to a semi-rural society. Certain aspects of modern life mean we need these things,’ he argues.

WWF toxics policy officer Giles Watson disagrees. ‘With respect to harmful impacts, it is always difficult to establish cause and effect with absolute certainty, but we believe that there is enough writing on the wall about the adverse effects of these chemicals to warrant applying a precautionary principle,’ he says.

Clearly, this is an issue that’s bigger than design. Stakeholders across the board – from governments and the chemical industry to manufacturers, retailers and consumers – all need to get involved. But designers can play their part by considering and highlighting alternatives where possible.

As Brown of Sprout Design points out, ‘Producers should consider alternatives; retailers and manufactures need to build it into the brief. And designers also need to get involved. It’s not just one person’s responsibility. It will take a combined effort on the part of everyone to change things.’

Alkyltin – persistent and accumulates in our bodies. Used as an anti-bacterial; for example, in chopping boards, and in the production of some plastics. Known to be a hormone disrupter

Bisphenol A – used in linings for food cans and lids, plastic bottles, computers, CDs and other products. It may affect hormone systems and has been linked to reproductive problems in unborn baby boys.

Brominated flame retardants – used in fabrics, furniture and plastics. Most are persistent and accumulate in living organisms, and several have been identified as hormone disrupters.

Phthalates – a group of chemicals used in many PVC products, medical devices, children’s toys, teething rings and clothing. Many of them are hormone disrupters and phthalates have been linked to recurrent miscarriages in women.

Artificial musks – the fragrances added to products such as perfumes, cosmetics and laundry detergents. They are persistent and bio-accumulative and some are hormone disrupters

Source: Friends of the Earth