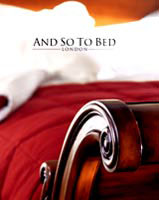 And So To Bed is in the throes of an image makeover, the first evidence of which is the relaunch of its website last week, designed by Reef Communications.

The next stage will see the relaunch of the luxury bed manufacturer’s identity, followed by the redesign of its 12 UK showrooms.

The company is also gearing up for launch in the US next year and opening four more stores in the UK in August, increasing its total estate to 30 stores by the end of next year, says And So To Bed International sales director Brent Cooper.

Reef has started work on the identity and it has been asked to adopt an advisory role in the revamp of the showrooms. The group is in the process of redesigning the manufacturer’s point-of-sale graphics.

The identity project is expected to be completed within four weeks. Interiors in existing showrooms, which will be designed in-house, are meanwhile scheduled to roll out in the autumn.

“We are building the retail side and now only manufacturer for ourselves. We have also expanded the product over the past two years, so we need to show what we are about,” says Cooper.

“We may tweak the identity in terms of colours, but there will be no name change. We are also advising on the look and feel of its showrooms. It is important to keep colours uniform,” he says.

The consultancy has been working with the manufacturer since May last year, and was appointed without a pitch. Reef is negotiating a monthly retainer fee.