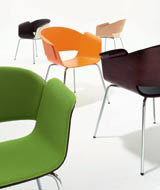 The theme for next week’s Orgatec office furniture trade fair is Living at Work, a frightening concept for most, and near-reality for some. But Orgatec, which has shifted its focus from just chairs and tables to include discussions, symposiums and trend analyses, believes our social lifestyles and workplaces are more closely linked than ever.

Certainly, we’re working longer hours. Requests for flexible working (part-time, starting late or leaving early) have risen sharply, and mobile and home-working are still on the up. At work, staff are demanding more ‘down’ spaces, such as quiet thinking areas, better quality refreshments, softer furnishings and spaces to socialise. If we’re spending more time in the office, the thinking goes, why not enjoy it?

Work environments are becoming increasingly ‘non-hierarchical’, Orgatec’s organisers believe. And companies are being forced to promote workers’ ‘capabilities, motivation and creativity’. In other words, open, democratic offices rule, and the need for places to be creative are informing offices’ design and layout.

This is backed up by research by Mori earlier this year, which called for workplace design to ‘mimic life in the home’ with ‘borderless’ offices that ‘bring variety into the workplace’. One side effect of the growth in democratic spaces is that workers are seeking other ways of displaying their status, often in the form of gadgets and the latest technological wizardry (Feature, DW 9 September).

Non-hierarchical offices are almost the norm, says Stephen Hunter, director of workplace design at Aukett. ‘In the past, managers’ offices stood empty half the time, but they were so highly personalised it was difficult for others to use them. The trend now is for totally open-plan spaces with a wider range of meeting rooms. As a result, managers often hot-desk,’ he says.

Aukett is currently working with a Government department to help it use its central London office more wisely. It’s seeking to introduce more flexible spaces, not least to help accommodate its growing force of home-workers who come into the office about once a week for meetings.

Office furniture is reflecting these shifting work patterns, Hunter says. The growth in home-working has led to reduced desk space but increased demand for break-out spaces.

Office furniture manufacturers are responding to the changing workplace culture, agrees Phil Hutchinson, managing director of BDGworkfutures. ‘We’re seeing a rise in bench- style, movable furniture from the likes of Vitra and Beyon, that enables people to reconfigure their spaces,’ he says.

Orgatec may be trumpeting the benefits of blurring working and living, but clients should be careful, warns Hutchinson. ‘We have an issue with domestic interior design influencing workplaces,’ he says. ‘Trends have been to personalise workplaces, but that can make it difficult to work. And it can be hard to adapt to homeworking if you’re used to an office environment.’

Harriet Hunter, a former workplace designer at Ideo who set up workplace consultancy Agile Space in January, agrees. Trendy dotcom offices that over-personalised their offices with garish colours and intrusive pool tables have disappeared, she says. ‘Now, staff just want the tools to get the job done in pleasant working environments. The best companies encourage staff to leave at six and take proper lunch breaks – very different to two years ago,’ she says.

Creating designated social spaces for staff is vital, says Hutchinson. ‘Workers need space to meet, relax away from their desks and unwind,’ he notes. Modern businesses are invariably about ‘bringing people together’, in whatever line of work. ‘I can’t think of a business that wouldn’t benefit from [this approach],’ he says.

Designing a comfortable, inspiring office environment needn’t cost the earth, either, Harriet Hunter adds. Agile Space recently worked with Radio 1, which wanted ‘to be more creative’. With a small money pot from the BBC’s Making It Happen scheme (DW 31 July 2003), the team bought a sofa, noticeboard and simple displays to create an ad hoc meeting space. In the six weeks since the space has been around, the team says it has ‘never been so creative’.

Elsewhere, Agile Space has just finished an office for think-tank Demos, which moved to a larger space. As a charity, it was aware of not over-spending on design, and sourced all its furniture from Ikea. ‘The challenge was not to make the office look like an Ikea catalogue,’ she says. And no, she didn’t have to assemble it either – that became a Demos team-building exercise.

But certain domestic trends are creeping into office design. ‘Offices need spaces to bring people together,’ says Hutchinson, ‘and kitchens are often the best place for this. You need to be able to get a good cup of coffee, or staff will go outside to get one.’ On their own, he says, such elements may seem ‘gimmicky’, but taken as part of a cultural shift in office culture, they’re vital. Harriet Hunter agrees. For Demos, she sourced a ‘very cheap’, large wooden table for its kitchen, where staff congregate to eat, drink and talk.

Offices are generally becoming less cluttered, with cleaner lines and transparent elements, in tune with wider design trends such as the Apple iMac, says Kevin McCullagh, director of Seymour Powell’s Foresight unit. ‘The perception is that working people are constantly “stressed out”,’ he says, ‘so companies are trying to address that with nicer materials and more minimalist environments. The reality is that we’re no more stressed out than we were.’

Maybe not, but designers and clients shouldn’t underestimate the importance of a clean office space, somewhere to eat lunch and drink a decent cup of coffee.

Orgatec 2004 runs from 19 to 23 October at the Cologne Messe, Cologne, Germany

Event to power up Riverside Museum

Look beyond the facade

Sleep with the fishes