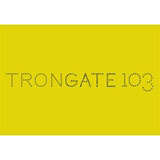 Graphical House has created a brand identity for a new £7m arts venue, Trongate 103, which is due to open in Glasgow in 2008.

The centre will form a hub for designers and artists working in a wide variety of media such as printmaking, photography, digital media, film video, kinetic sculpture, painting and ceramics. The venue will house galleries, workshops, artists’ studios and production spaces.

Graphical House was appointed to design the identity for the venue in December following a pitch. Part of the brief was also to develop wayfinding and signage for the centre, says a spokeswoman for Glasgow City Council.

The identity has been designed in collaboration with film-maker and designer Sarah Tripp. It features a typeface drawn up in two weights comprising a variety of icons designed to represent the diversity of the artistic activity that will take place within Trongate 103. These icons are then put together and used to make up the type of the word ‘gate’ within the logotype.

‘This is almost invisible at small scale, but highly visible and exciting when used large on signage for example,’ says Daniel Ibbotson, partner at Graphical House.

Trongate 103 is designed by Scottish architect Elder and Cannon. Additional designers may be appointed to create installations and art pieces for the venue, according to the spokeswoman.

Trongate 103 is located in the Merchant City area of Glasgow, commonly known as the old part of the city. It forms part of a long-term strategy by the Glasgow City Council to create a dynamic arts quarter in the city.

The centre will provide professional creative and skills development for artists, classes and training courses for the wider public, curriculum-based education programmes for schools and outreach projects for community groups.

It is being launched in partnership with nine Merchant City-based visual arts organisations and is funded by the Scottish Arts Council, Scottish Enterprise Glasgow and the Merchant City Townscape Heritage Initiative.

Graphical House was awarded this year’s Design Grand Prix at the Scottish Design Awards for its animation film The Last Laugh History of Swearing, made for BBC Scotland. Daniel Ibbotson was also named Scottish Designer of the Year (DW 8 June).