Samsung has launched a Space Monitor, designed to reduce the “dead space” occupied by current monitors by 94%, while increasing desk space by 40%.

The driver for the product is reconciling the consumer need for larger screens with the fact they are taking up more desk space. Using a clamp instead of a stand, a design solution was sought, which frees up desk space.

The 68cm Space Monitor features a cantilevered stand, which allows the monitor to sit flat against a wall when not in use, effectively clearing the desk it sits upon. It can be maneuvered into place when required. 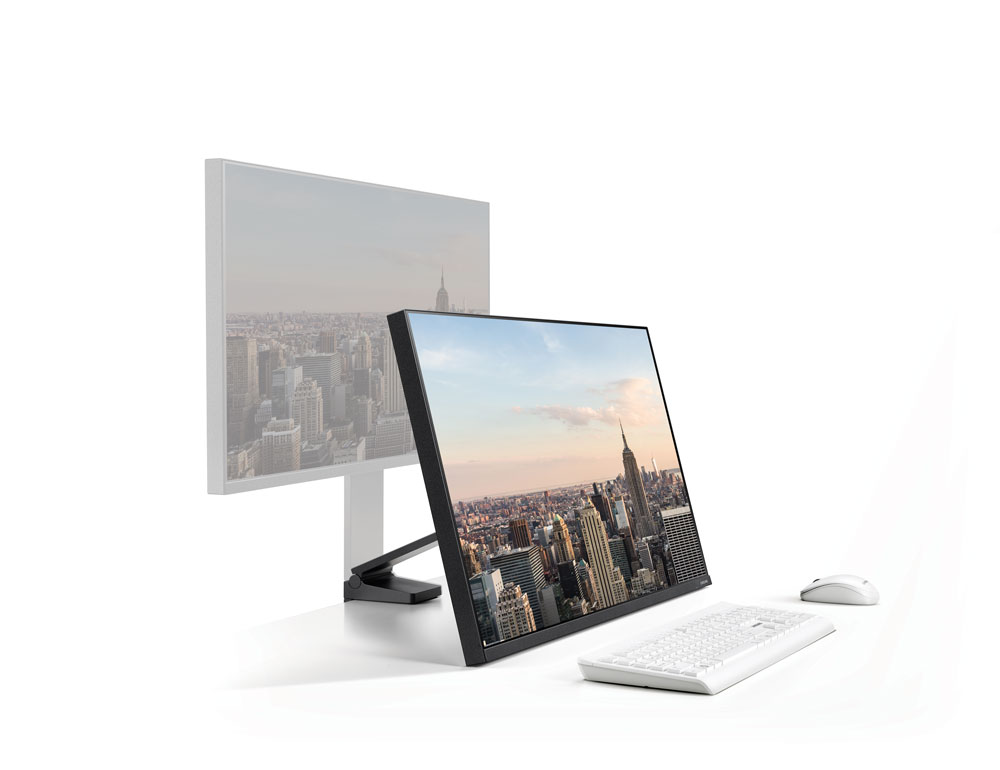 Attached to the top edge of a desk with a screw, its height and angle can be fully adjusted to give a range of use options. The stand is able to withstand the weight of a screen and capable of fitting most desks of up to 90mm in thickness, which is the result of a long period of customer research. A dual hinge means that height can be adjusted in a pulling or pushing motion.

The stand features a channel for concealing its power and HDMI cords and a strengthened hinge, which the screen pivots from and has been stress tested to withstand more than 5,000 movements. The arm of the stand can take it from a height of 213mm down to desk surface level.

This height versatility has also been designed with different types of users in mind; particularly in the home or in public spaces where it can be quickly adapted for the needs of children. Its “zero level” desktop setting also means it can be used in tandem with a laptop screen at the same eye level. 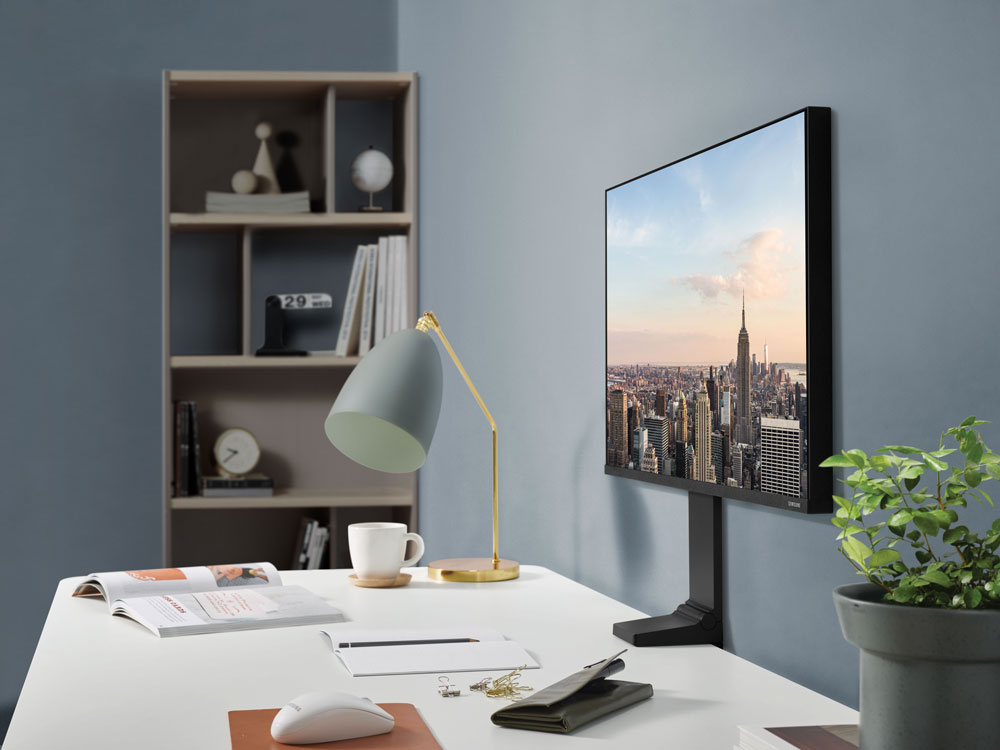 The look of the Space Monitor, which Samsung says is “beautiful from all angles” has been informed by its purpose, which is to create as much desk space as possible, while looking unobtrusive and meeting all functional work and play requirements.

Even the back panel is flat, which gives the product a clean look similar to the “360 design” of Samsung’s TVs. The bezel-less display means the screen blends in well with its surroundings, according to Samsung.

Samsung conducted research to find out about the needs of its customers that weren’t being addressed. Seog-gi Kim, executive vice president of visual display business at Samsung Electronics says, “That’s where the idea for the Space Monitor started. We wanted to solve their problems so we designed a monitor that can stay on the desk only with its clamp while concealing any messy cables.” 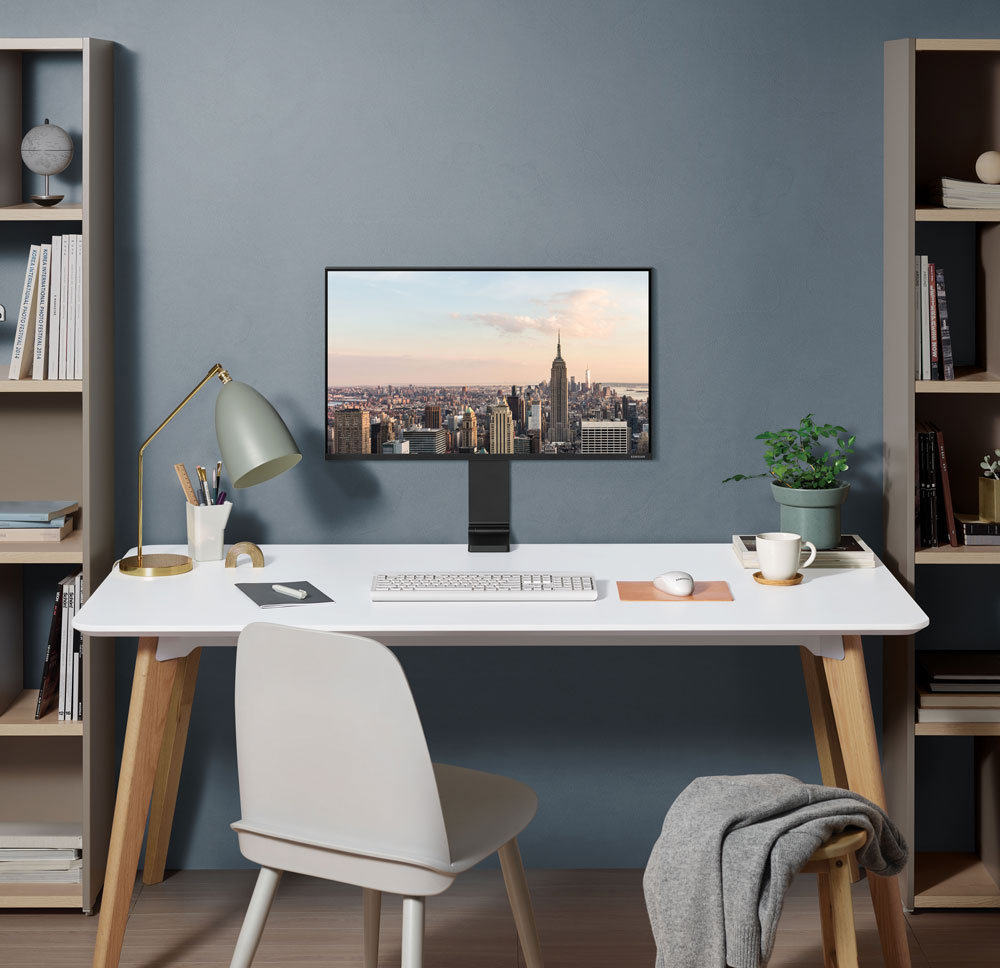 Rather than relying on multiple screens, the Space Monitor gives users the ability to work effectively on two tasks simultaneously. Using Samsung’s Easy Setting Box software, windows can be arranged quickly and simply, according to the company.

One option is the Picture by Picture (PBP) function, which draws from two separate sources and displays them on the left and right side of the screen in unison.

Meanwhile the Picture in Picture (PIP) function separates the screen into two parts. One source device is displayed while another source is displayed at the same time in inset windows.