Question-and-answer website Quora is rolling out a new look – redesigning its identity and overhauling its website look.

The new identity has been developed by Commercial Type and sees the Quora wordmark, which was created in 2010 by Cuban Council, redrawn.

Commercial Type partner Christian Schwartz says the new logo aims to tackle some of the problems with the previous mark – including that the Q was “very large, but the tail looked weak”, that the spacing was “very tight” and that the bottom bowl of the lowercase was “very heavy”.

The final typeface was based on Baskerville (also the basis for the previous logo) and features a broken loop on the Q, which Schwartz says “allows the logotype to refer to the previous logo while moving forward” and an angled tail on the u.

Meanwhile flat serifs on the u and the r “make the logotype look calmer and more stable, says Schwartz, who adds: “The lowercase is considerably larger in proportion to the Q than it had been in the existing logo.”

“One of the most difficult combinations in type design”

Schwartz says: “Special care was put into making the soft terminals on the r and a relate well. This is one of the most difficult combinations in type design and it is not easy to make it inconspicuous.”

Quora communication designer Holly Gressley says: “Our aim was to increase design flexibility in order to create a larger range of ways to use Quora’s logo in our design language, and to improve the craftsmanship of the word mark overall.

“We maintained consistency with our brand by keeping our unique ‘Q’ and Quora red color, while referencing the academic spirit of our original Baskerville logo.”

As part of the redesign, Quora has also introduced a new header on its website, which Gressley says brings “visual lightness”, and updated the design of its blogs – decluttering the amount of buttons and links and aiming to make it easier to find blog authors on shared blogs. 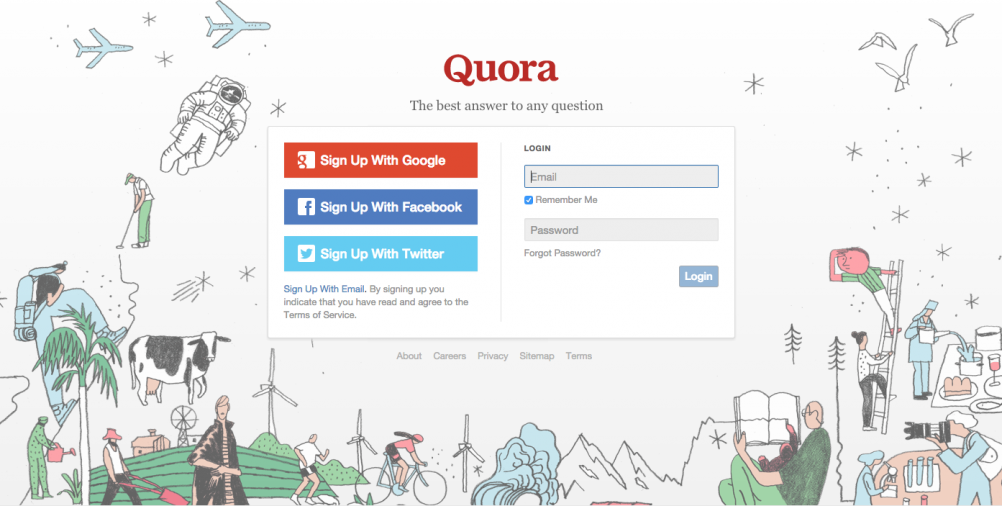 Quora has also introduced a series of illustrations around its site, by artist Josh Cochran.

Gressley says: “Our aim is for Quora to be the best place for sharing knowledge, and an important part of that is great readability, typography, and visual design.”