The BFI Flare: London LGBTIQ+ Film Festival will return for its 35th edition this week.

Taking place between 17-28 March, this year’s event will include 26 feature film screenings as well as a programme of shorts selected in partnership with The British Council.

With more than three decades behind it, BFI Flare is one of the world’s longest-standing queer film events, and the biggest LGBTIQ+ film event in the UK. With its lengthy past comes a rich graphic heritage, perhaps best shown through its film and event posters.

Ahead of its opening, we asked BFI head of brand and creative Darren Wood to delve into the festival’s archives and talk us through some of his favourite pieces. 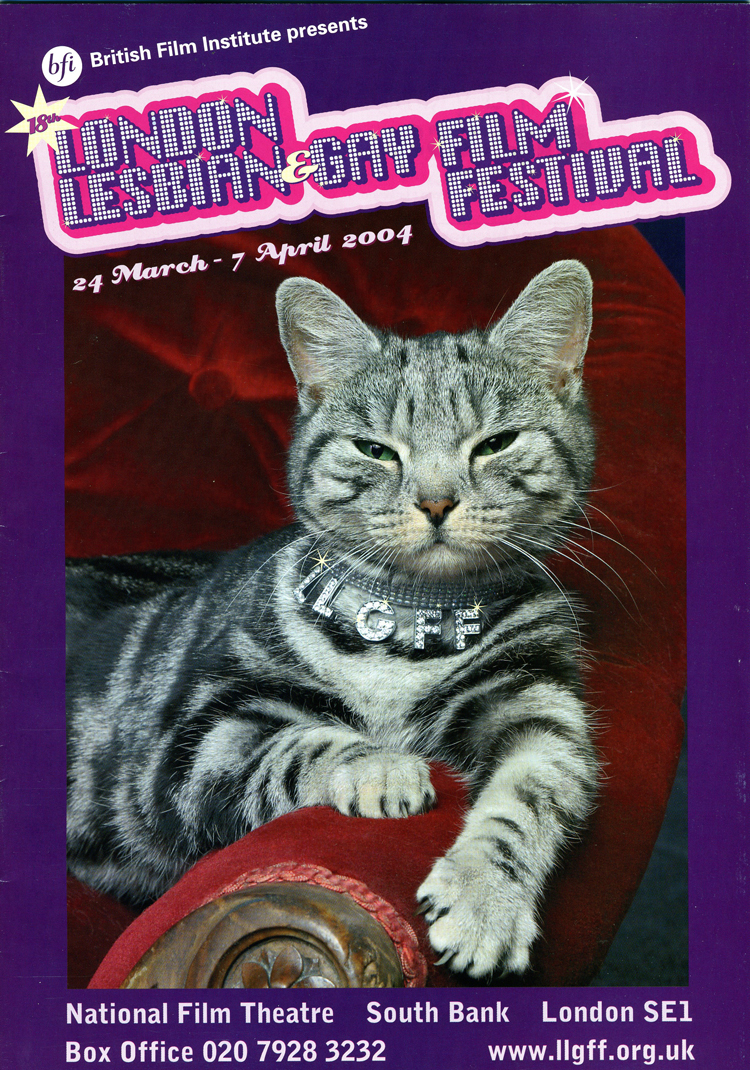 The poster from the event’s 18th edition in 2004 is the first Wood picks out. He says this poster, which features a reclining cat sporting a diamond choker, often “pops up as a favourite of all the BFI Flare artworks”.

There were two posters in circulation that year – this one with its glamourous cat, and a similar version with a glamourous dog. It’s the cat, however, that sticks in people’s hearts and minds. 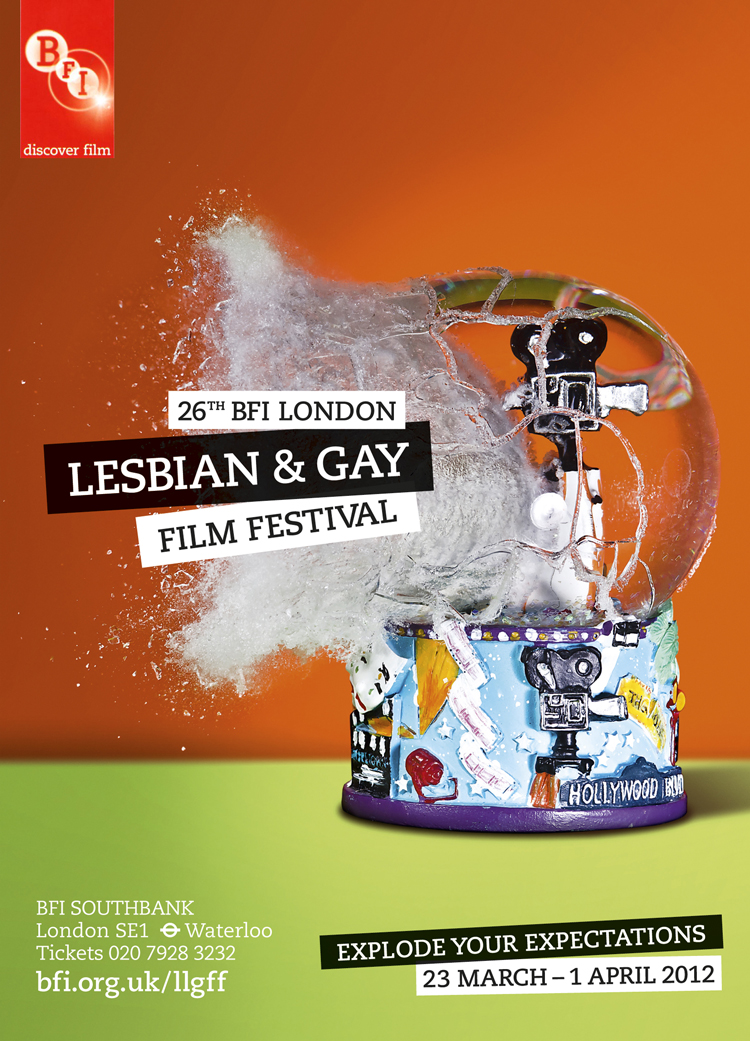 The poster features a snow globe mid-explosion, and as Wood explains, the image was captured by a “kindly gentleman in the US” who shot both the picture and the ornament.

“We only had two goes, and happily it came off first time,” he says. 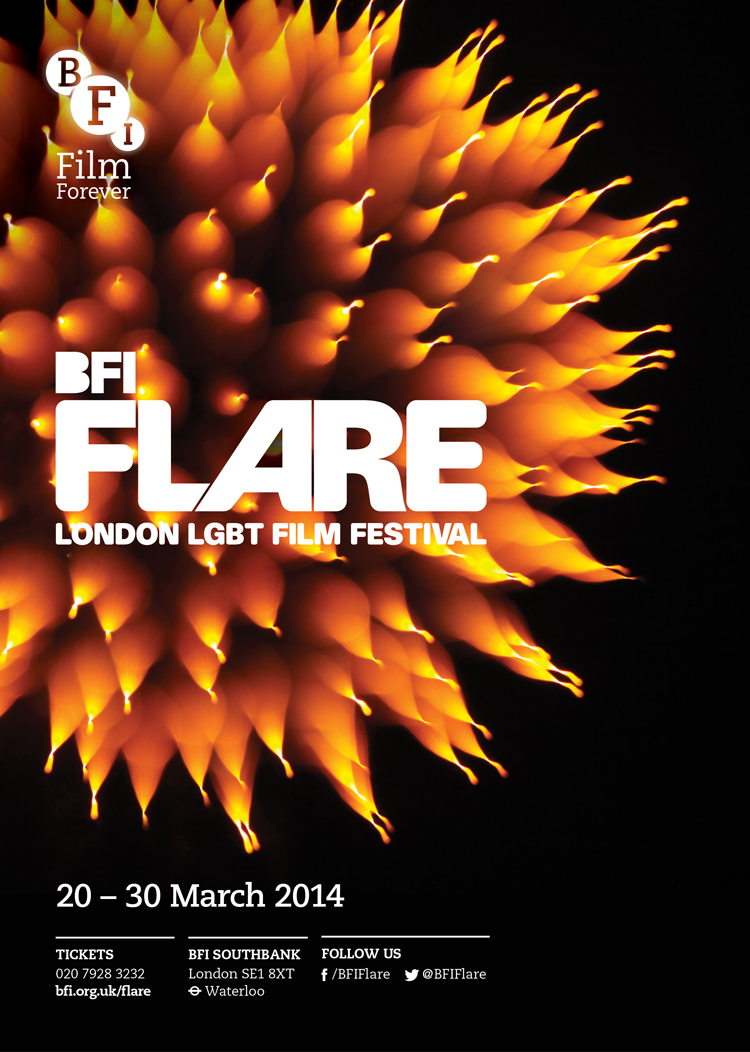 In 2014, the festival adopted its current name: BFI Flare. To reintroduce the event to the world under its new moniker, the team opted for a poster that shone bright. The final poster is simple, but effective in its mission.

“[The poster] stands as a beacon to all and as a literal light in the darkness,” says Wood. “This artwork literally burns twice as bright, but not half as long – and of course, it also has flair.” 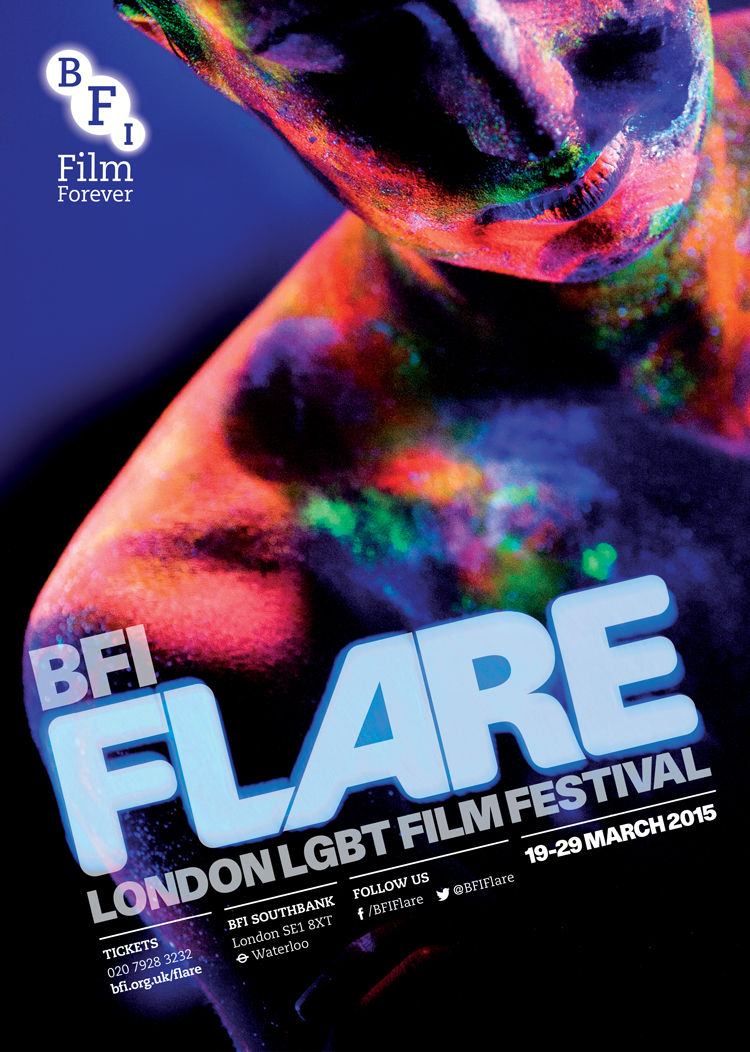 The poster for 2015 came to be known as the “Spirit of Flare”, according to Wood. The androgynous character depicted is significant and symbolic for several reasons, he adds.

“[They] encapsulate both the non-binary attitudes of the festival,” says Wood and also the fact that “it’s not just a film festival” – an idea reinforced by the figure’s day-glo skin – which indicates that the event is also a party. 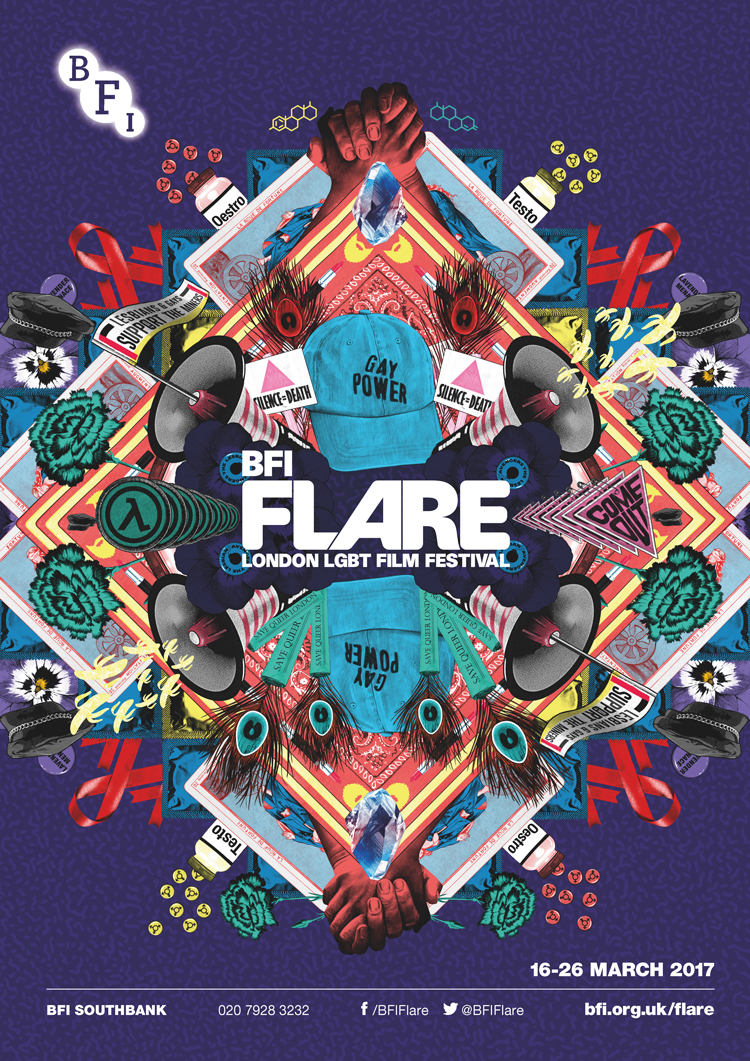 In 2017, the BFI Flare posters reflected the turbulence of the world with a piece dedicated to protest.

A kaleidoscope of protest imagery adorned the posters that year, taking inspiration from the demonstrations throughout history, like the Section 28 protests of the 1980s, to “raise our fists in the air”, Wood says.

“The world seemed to be turning on marginalised groups [in 2017],” says Wood. “It felt like the time was ripe for protest.” 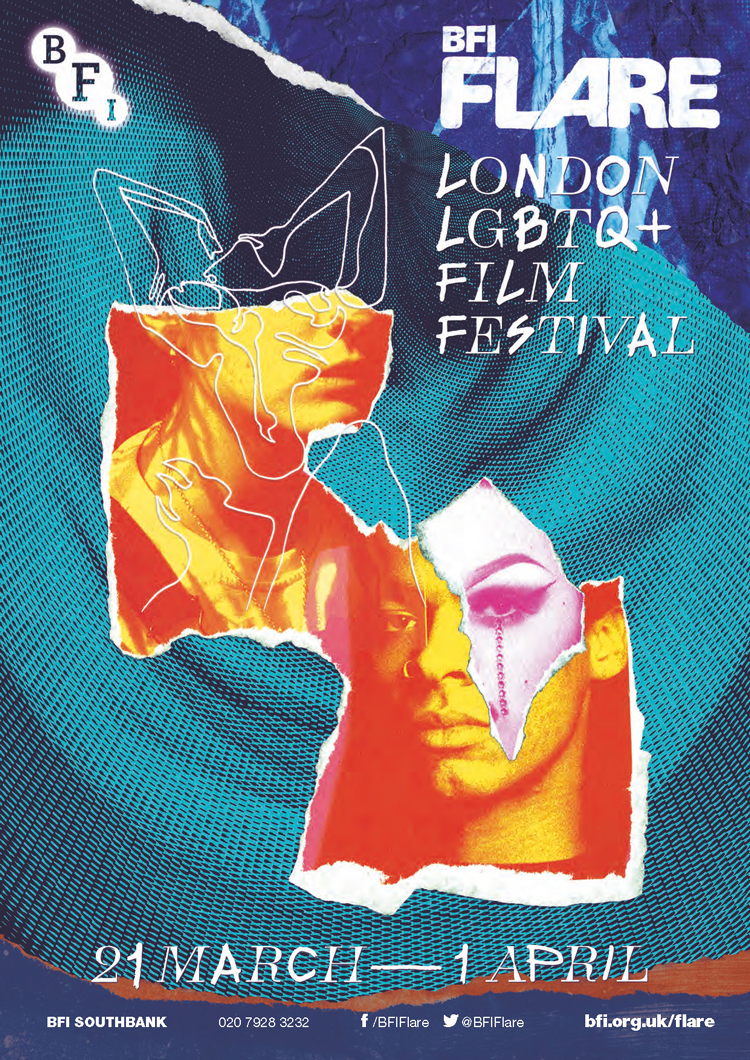 In 2019, the team continued in its mission to “pull disparate groups from the LGBTIQ+ community together”.

The aesthetic chosen for this poster was borrowed from fanzines – a decision that gave the artwork an “authentic voice”, Wood says.

Continuing this theme, the team also created a series of fanzines for the festival itself, with all the contribution coming from a call-out to BFI Flare’s audiences online. 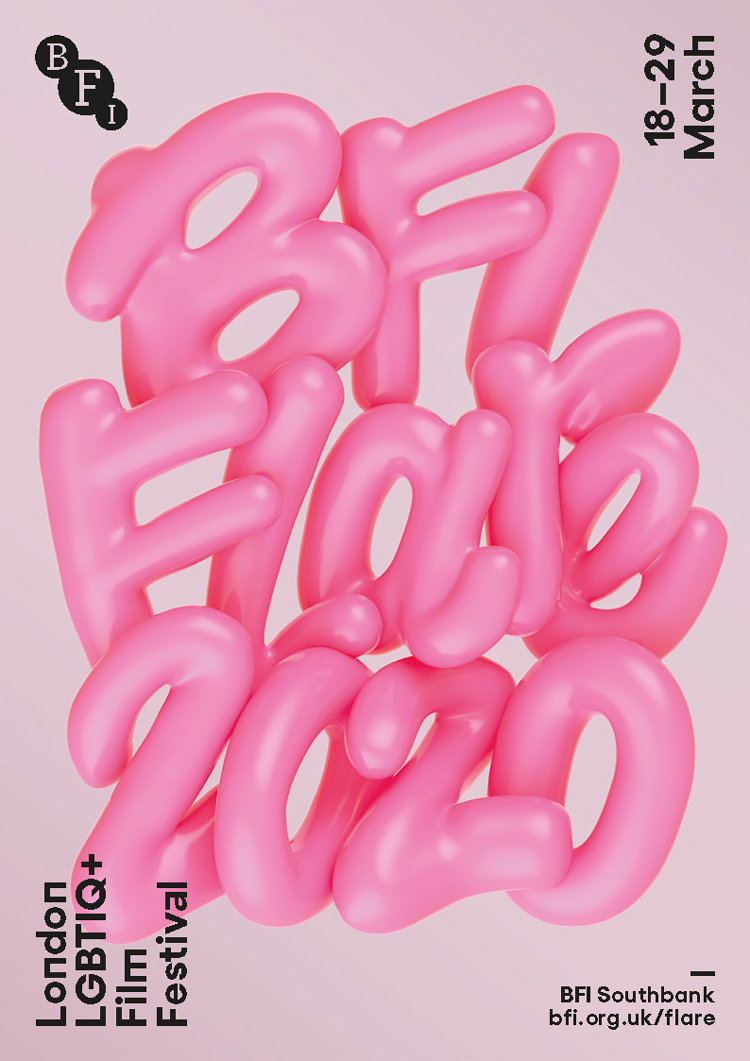 Wood gives an honourable mention to last year’s poster design. 2020’s poster represented a festival “that rose from the ashes of lockdown”, he says.

“We had grand plans to turn BFI Southbank into the comfy, welcoming safe space that this artwork suggests, but BFI Flare had to make a spectacular pivot online,” he says.

Wood recalls making a “melancholy journey” back to the venue the following summer. Poignantly, he was greeted by the poster through the window of the empty building, still there many months later. 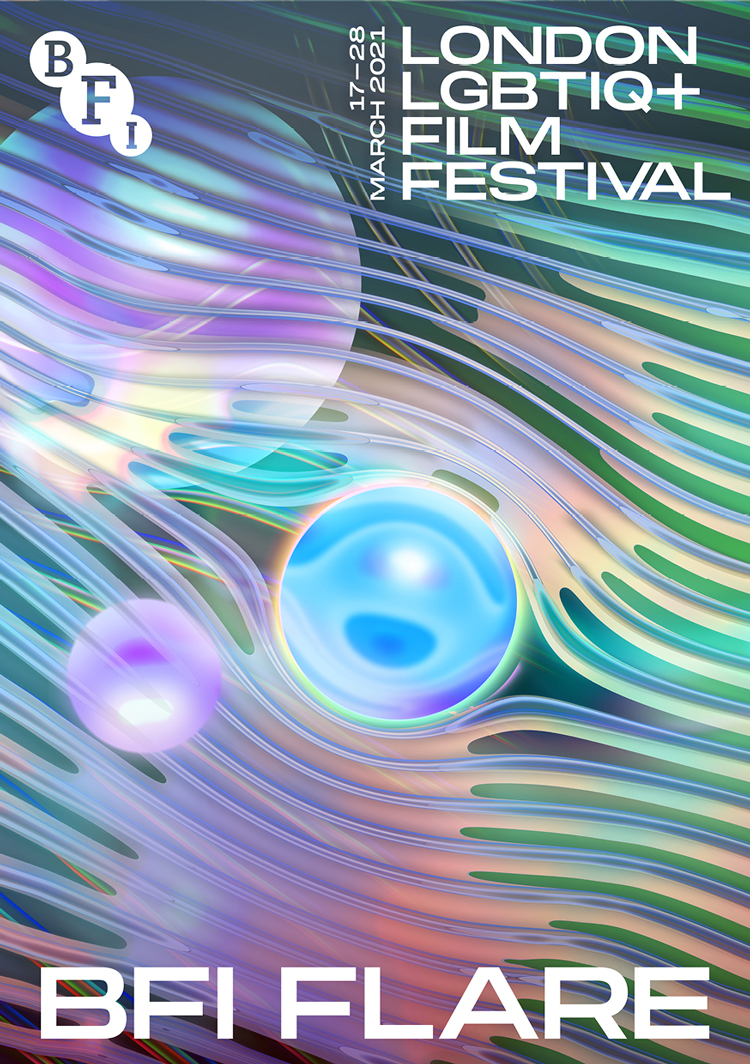 This year will also see the festival take place online, and the poster seeks to represent the extremely challenging year gone by, and the specific troubles felt by those who already are marginalised in society. Working with BFI Flare regular collaborators Studio Moross, the poster is a “a beautiful object moving from chaos into light”, Wood says.

Studio Moross worked with music producer, animator and frequent studio collaborator T.R. Bennett to interpret their story to music. The partnership produced a soundscape for the BFI Flare visuals and festival ID on the BFI Player.

BFI Flare runs from 17-28 March. Content can be accessed through the BFI Player. Tickets are available now via www.bfi.org.uk/flare.

Ocado ditches green for grape in rebrand by JKR