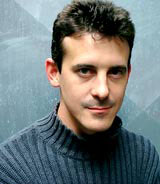 I was at a dismal convergent media conference recently. Or was it interactive TV? Or maybe streaming media?

One of the startling (although that’s probably too upbeat a word to use in this context) things about dragging oneself to these events is how they all merge into a hazy, Powerpoint-heavy view of what our future will be like. And they all have the same graph in them. The one that has the past, the present, the future along the bottom and that line that just goes up and up

Now, if these people were selling life insurance or health foods, we would dismiss them as wide boys chasing a quick buck. The fact that they are selling design businesses technology seems to throw all our natural bullshit filters out of the window. What is it about digital technology that makes this happen?

A lot of the time technology is used as a kind of “cloaking” device to hide the fact that something is truly awful. The more you can talk about the amazing code and delivery systems behind how that rather mundane Web page was produced, then the less emphasis needs to be put on the fact that it’s actually a rotten piece of design. I mean, supermarkets don’t try and sell us food by describing the unique delivery and ordering management systems put in place to deliver a fresh guava, do they?

This is technology’s interesting relationship to design. Technology is currently packaging up the future for us, while design has historically been about packaging up the present – how to make an annual report look good, how to brand a TV station, how to sell soap suds (here and now).

And it seems that, because technology is so effortlessly able to take control of what the future will be (even though it will be nothing like what’s being sold), we as designers have agreed to remain in the present and allow the gatekeepers of the technological soul to dictate to us how we must respond to this.

That age-old problem, the balance between design and technology is a particular difficulty facing creative businesses at the moment. The impact of new technologies has created the same debate that desktop publishing did in the 1980s. Except that now there seems little time for any talk since the onward rush of all things digital leaves us out of breath and speechless. And, as it gets faster, designers are left very much in a catch-up position – unable to fully comprehend the massive changes that are going on and thus unable to use the new opportunities afforded by digital effectively. Or rather, use them according to a graphic sensibility rather than a purely technological one.

Part of the problem is about designers feeling under threat, just like print workers or record companies have before them. Part of it is the arrogance of the old design school in dismissing work that uses technology in an effective manner. But a lot of it is about the use and abuse of new technologies and the impact this has on established working practices within the business, as well as a designer’s view of themselves.

Technology is great. Believe me. For somebody who was politely asked to stop coming to ‘O’ Level Art classes for the very good reason that I haven’t – and never will have – a clue how to draw, the computer is a godsend. But the technology is still only a tool. And technology, or the promise of it, changes from day to day.

However, good design should be a constant that can be applied to any medium, regardless of the way it’s produced. It should flow through transient trends, such as Web pages, TV, streaming media, and DVDs, rather than be dictated by them.

An example is interactive TV: everybody’s bÃªte noir in the design world. Why? Because it’s scary or primitive. Or because the people leading the debate want us to think it’s an entirely new medium that necessitates a completely new type of designer (the interface designer).

What a load of bollocks. We are still dealing with TV. Any designer who understands how to design for TV can design for interactive TV (give or take half an hour on what you can and can’t do). For nearly all the people who watch it, it’s still the same telly in the same corner of the room. What’s different there? But technology people don’t like that because it takes away their power as gatekeepers of the medium.

Digital technology creates sages and experts like there’s no tomorrow (there probably isn’t for most of them). And a fair few of the ones linked to design are full of well, lets call it hot air, shall we? The key battle in design over the next year or two will be who calls the shots in this respect. We are already massively reliant on technology solutions to produce a good product.

And designers are generally in awe of technology (mainly digital) and allow it to dictate their design decisions, rather than inform them. Look at the massive predominance of Flash on websites; look at appalling sites that are “great”, nevertheless, because they use the latest streaming software or use the latest implementation of HTML. Look at the TV field and the obsessive reliance on the latest plug in or post-production technique.

Good design is about finding solutions to visual problems. There’s lots of design I may not like, but appreciate for its approach to “the problem”. Which is why it’s important designers start to think again about the way they use technology and, more importantly, why they use it.

A degree of soul searching before one embarks on a particular job would at least allow you to know whether you’re using those 240 Photoshop layers as a design statement, or to cover up the fact you haven’t got a clue what you’re doing, but it looks “kinda nice”.