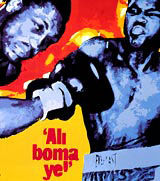 Your first impression of Schizophrenic is, “What a surprise, another coffee table compilation of edgy street art with lots of pretty pictures but not much to stimulate the brain.” But the best in this category can also be an engaging read.

Lodown magazine, which celebrates pop culture in all its forms, from interviews with hip hop stars to sideways stance sports, has produced a second book showcasing its finest artwork. Schizophrenic certainly kicks off in style – a combination of sequences showing skate and snowboard tricks, all executed with the kind of flair that fans of the sports have come to expect. This means using fisheye lenses to make the shots look all the more gravity-defiant, plus filters and exposure tricks to make things look vaguely trippy.

The photos showcase the punk, rebellious side to skateboarding – hardly an original approach – but the quality is good. The background for most photos is the brutalist architecture in Berlin, and one of the rare segments of copy in Schizophrenic has an off-beat design angle that will either amuse or infuriate designers, depending on how seriously they take their work. Berlin’s National Gallery, designed by Mies Van Der Rohe, is a favourite street skating spot. The writer talks about the damage caused by skaters to this national treasure, before launching into a bizarre, but entertaining critique of Bauhaus architecture and furniture.

With precious little else to read, the graphics better be good. My favourite piece was Remix by the book’s author, Thomas Marecki (aka Marok). He has taken an all-too-familiar photo of Muhammad Ali connecting with what looks like a knock-out blow to George Foreman, taken by David King in 1976. Marok substitutes vivid colours, puts a shadow on the figures to give the effect of motion, and added “Ali boma ye!”, the battle cry of Ali’s loyal fans in his legendary fight against Foreman in Zaire. Though the image looks like a piece by graphic artist Mitch that appeared in Scratch, Dirty Graphics and Strange Characters, another title about street style graphics, Marok’s version has even more kinetic energy than the original photograph. The rest of the graphics lack the intelligence, vibrancy and richness of the very best graphics in this category. An exception is Evan Hecox’s celebration for Lodown’s 21st issue, showing a vintage muscle car and the slogan: “Throttle your throat and burn kerosene”. The slogan seemed like an odd way to celebrate, unless of course autoasphyxiation is your bag, but the artwork has an amusing style – the car manages to be kitsch and butch at the same time.

Schizophrenic is an appropriate title, because this book doesn’t really know what it is. At its best it’s a compilation, like Ray Gun’s Out of Control, but without enough feature extracts. It could be a Scratch rip-off, or perhaps, with its heavy emphasis on skate photography, it is similar to another book, Dysfunctional. But that had more twisted lifestyle photography – the kind of stuff that would appear in skate magazine Big Brother – that gave you an insight into some of the perverted minds on the skate scene, plus a hilarious shot of a cat drinking out of a toilet.

Schizophrenic should have figured out what it was before it bust its way out of the psychiatric ward and on to the streets.

Schizophrenic, The Colour Explosion – Lodown Graphic Engineering Part II, by Marok, is published by Die Gestalten Verlag, priced at £25.99. It is published on 2 March

Delia’s recipe for the Internet