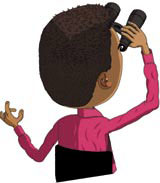 But it doesn’t seem too long ago (1999) that I was sitting in the audience at Earl’s Court as Johnson went up to collect a D&AD Silver for his Yellow Pages Directory typeface, to the accompaniment of sniggers from the well-heeled ad people sitting near me. As a designer I bristled at this slight to my profession. Johnson, however, is much more grown-up: ‘Advertising people can learn from designers that the details are important, and that all the new art direction ideas are incubated in design. And designers can learn from the ad world how to communicate with people rather than confuse them, and how to lighten up.

‘If design and advertising learned to live with each other again, the direction of the brands they both work for would be clearer. Put simply, if both sides tried to see the other’s position then clients would waste less money,’ he adds.

For the view from the advertising side of the fence, I spoke to Paul Belford, a senior art director at the UK’s largest advertising agency, AMV.BBDO. Belford is well-known as a supporter of good design and – unusually for an advertising art director – he has won D&AD pencils for both advertising and design. I asked him how people in advertising viewed design: ‘The design of many print ads could be improved,’ notes Belford. ‘I think one reason for this is that there aren’t enough good art directors employed in agencies. Naturally, interesting work can scare many clients, and research companies can prey on this insecurity. It doesn’t take a genius to work out that innovative work isn’t going to research well, because people initially tend to be unsure about it. I think it was Bill Bernbach who said, “We spend so much time canvassing public opinion we forget that we can influence it”.’

A number of adland creatives have expressed dismay at the increasingly restrictive brand guidelines that determine the ‘graphic look’ of ads. I wondered if Belford felt that this accounted for some of the sterility in advertising design. ‘There’s a lot of confusion about brand guidelines,’ he claims. ‘Of course they are necessary. Especially when several different communications companies are producing material for one client operating in multi-faceted service markets, with many different points of contact between themselves and their customers.

‘When a new brand guidelines book lands on the desk of most clients, they breathe a sigh of relief. Not because of the synergy it will bring to their communications, but because judging creative work is extremely difficult for the vast majority of them and they now think they know what it will all look like for the next five years. Clients who adopt this attitude will have boring work after five weeks. Bad guidelines, or the misinterpretation of good guidelines, become a straightjacket. It happens all the time, and millions of pounds are wasted on communications that no one notices. Should all the press ads look just like a business card or invoice slip? I don’t think so. But it can be a big temptation for clients. Design groups must hammer the point home to their clients and build in sufficient flexibility to allow for fresh, exciting and, therefore, noticeable and effective work throughout the client’s communications material,’ he adds.

Belford hits the nail on the head. Business life has become so hazardous and competition so intense that risk has been eliminated from most areas of commercial activity. If we follow this no-risk philosophy to its logical conclusion, all communications will eventually look the same. As Orange has proved with its current campaign, you can make a difference by being brave with graphic design. But you have to do it and not just claim you are doing it.