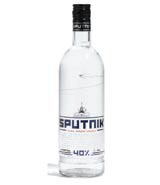 Enterprise IG has revamped Sputnik Vodka’s identity, as brand owner Russian Vodka House moves to tilt the drink toward the premium end of the on- and off-trade market.

The new-look identity, which launched last week, sports an airborne Sputnik satellite emblazoned with a Russian star and a rocket propelled from a ‘launchpad’ label, rendered in a Constructivist typeface.

According to Enterprise IG managing creative director Pete Hollingsworth, the Sputnik Vodka brand is ‘all about achievement, goals and ambition’, and the identity taps into the notion of Russia’s ‘pioneering’ spirit, particularly during the 1950s.

Sputnik – the first man-made object to leave the Earth – was launched in 1957.

Sputnik Vodka’s clear, embossed bottle aims to reflect the ‘purity’ of the drink, which is triple distilled to create a 40 per cent vodka, Hollingsworth adds.