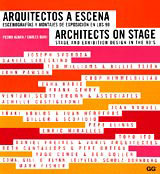 Trying to get to grips with Architects On Stage: Stage and Exhibition Design in the 90s by Pedro Azara and Carlos Guri, took me back to early encounters with Shakespeare and James Joyce. You read a passage once, twice, three times, and still your brain refuses to shift into gear.

That it’s written in Spanish is no excuse, as there is a perfectly adequate English translation.

Azara’s scholarly introduction on the meaning of scenography drones on for 12 brain-scrambling pages (“Let us consider… the ancient Italiot ceramics of Southern Italy”).

By the end of it I was reminded of Dorothy Parker’s remark, as the knock-out blow in a book review. She concluded by saying that “this book should not be tossed aside lightly but thrown across the room with great force.”

This is not light holiday reading. Indeed, anyone other than an extremely keen student wishing to discover how some European architects have turned their hands to exhibition design would devour the whole of Gideon’s Bible before attempting to unscramble this impenetrable prose.

“It could be said,” writes Joan Roig in a second introductory chapter, “that the exhibition exhibits nothing, represents nothing, is the abstraction of nothing, not even of itself, but is itself a reality, a factual presence, like any object that might be exhibited or any idea that might be transmitted.”

The exhibition as a concept, that is, for Roig looks at the bigger picture. So far as I could make out, she (or is it he?) concludes that what happened in the 1990s was “a kind of stylistic hybrid” of concepts, bringing together the idea, on the one hand, of the design being the most important thing and, on the other, that the objects on display are paramount.

The book is a sumptuously illustrated account of the work of leading architect/ designers in this field, including John Pawson, Zaha Hadid and Mark Fisher.

Pawson’s featured project, a 1997 Barbican exhibition entitled Potters In Parallel, featuring the work of Lucie Rie and Hans Coper, is all symmetry and light, minimalist to a fault. He obviously favours “the cult of the object”, as Roig dubs it.

Likewise, Hadid’s design for The Great Utopia (1992) at the Guggenheim Museum, New York, presented a stunning collection of Russian avant-garde artefacts from the early 20th century in such a way as to let them speak for themselves. There is an interesting contrast with another Guggenheim show, The Art of the Motorcycle (1998) in which US architect Frank Gehry did rather more flamboyant things with mirrors and black, undulating tracks. But the Guggenheim is such an extraordinary space that you could let a family of chimpanzees loose on an exhibition of bin bags and they’d come up with something aesthetically pleasing.

The book deals with performance as well as exhibition. Designs by Czech architect Joseph Svoboda for an Italian production of La Traviata look truly innovative and epic, again making clever use of mirrors.

And it’s good to see Mark Fisher’s work for the likes of U2 and the Rolling Stones included. The sets for these music marathons have to be models of practicality as well as visually striking and Fisher is a past master of both.

Architects on Stage is published by Gustavo Gili, UK price to be confirmed

Design Net spreads to Japan and the US

Do people go to the Tate because it’s free?