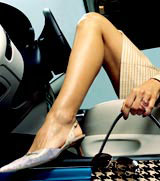 When you think of Jaguar cars, the image that springs to mind is one of the smoky businessman who relishes the drive to his smoky gentleman’s club in his smoky gentleman’s-club car. A distinctly classy statement of luxury that has held little appeal to a younger market. That is, until the launch of the Jaguar X-Type sports saloon, ‘a young Jaguar styled for a new generation’.

The concept was originated in 1997, under Jaguar’s then head of design, the late Geoff Lawson, and it is hoped that the car will bring in a whole new audience, including an increase in the number of women driving Jaguars.

Currently, women represent only about 10 per cent of Jaguar’s overall UK sales and Director of UK Operations Andrew Lester notes that, ‘Historically, Jaguar has had a stronger appeal to men because of its racing heritage and, in changing this perception, we expect to bring in more ladies than we previously had.’

With a V6 engine in either 3.0 or 2.5-litre form, all-wheel drive, which balances fun handling with a smooth ride, optional touch-screen navigation system, automotive climate control and sculpted bodywork available in 12 new colours, this is still a tiny car by Jaguar’s standards, usually associated with larger cars in the luxury market.

Jaguar is well aware that it needs to gain a position in this market and create legitimate competition for BMW. With only 15 000 Jaguars sold in the UK last year, Lester hopes that the X-type will help double this figure in the first two years. Initial reaction is good, with 100 000 reported enquiries from the launch at last month’s Geneva Motor Show. A new design scheme for Jaguar’s UK dealerships has also just been completed by BDG McColl Retail & Leisure, as part of Jaguar’s overall strategy for a more contemporary appeal.

New stamps will not feature the Queen’s head