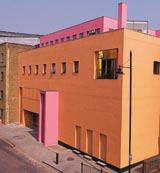 As the Museum of Fashion and Textile opens with the exhibition My Favourite Dress, Sara Manuelli gets the low-down from the designers involved in the project

A pink building with a dark space inside was never going to be an easy environment to design for, but then Zandra Rhodes’ brief for the Fashion and Textile Museum, designed by Mexican architect Ricardo Legorreta, was unconventional from the start.

‘There was already this idea of a dark space,’ says Frith Noble of Kerr Noble, responsible for the museum’s exhibition graphics. ‘But it was almost a crazy brief, [the space has] no walls, dark and [needed] lots of words.’

The words in this case, are there to explain the reasons behind the choices of My Favourite Dress, the museum’s opening exhibition. Seventy designers, among them Giorgio Armani, Anna Sui, Romeo Gigli and Alexander McQueen, all chose their favourite dress to exhibit.

Kerr Noble had to integrate the words with the display, taking into account that ‘often people don’t want to read that much.’ The solution is 30 000 handmade, orange side-glow polycarbonate characters orderly laid out on half-moon shaped steel sheets on the floor. The sea of characters not only spell out the text behind each designer’s choice, but also act as a wayfinding mechanism, marking the show’s rationale.

Entering the gallery through a theatrical black curtain, visitors find themselves immersed in a space illuminated only by spotlights that highlight the luminescent lettering and the dresses.

‘We wanted to make it more of an installation,’ says Thomas Heatherwick, who created the exhibition design and worked in close synergy on the 3D graphics with Kerr Noble. He says often exhibition graphics are placed on the wall to illustrate the curators’ ‘fine points’ about the exhibition’s content. In this case, it’s simple: ’70 designers with 70 reasons why.’

To achieve the ‘nothing on the walls effect’, Heatherwick asked a mechanical engineer, Andy Southern, to create a slowly rotating corkscrew mechanism on to which the dresses are suspended. Each dress moves about at a different speed and in different directions, floating ethereally in space. The dresses – a satin pink Pearce Fionda gown here and a Christian Lacroix with stripy trails there – are draped on clear plastic mannequins manufactured in Italy.

Some other dresses, such as a symmetrically cut Hamish Morrow shift dress, have been encased in bespoke black and shocking pink display systems placed in the smaller corridor section of the museum, ‘because the curators wanted to show them differently’. The silhouette of each dress is outlined on the case display ‘as if the dresses have been thrown through the glass,’ says Heatherwick.

Well versed in the financial restrictions that museum work entails, both Heatherwick and Kerr Noble had to come up with solutions that could still represent the glamour usually associated with the fashion world. Kerr Noble in particular decided to offset the glamorous/low budget contrast in all the print literature in ‘a cheeky way’. The posters feature ‘vanity pictures’ of each designer encased in cheesy 1980s-style heart-shaped cutouts, while the typeface, a bespoke font called My Favourite Font, is modern and slick looking.

Located in the Bermondsey area of London, just down the road from the Delfina art galleries, the museum intends to play host to several designers as well as being a study centre. It will be the first dedicated space in UK to celebrate the fashion industry. ‘I don’t want it to be “my museum”,’ points out Rhodes. Which is why it was so important, she says, that the opening exhibition featured both new and established designers. For the designers Heatherwick and Kerr Noble, the Fashion and Textile Museum is a great opportunity to flex their creative muscles in front of an appreciative audience.

The Fashion and Textile Museum is now open. The exhibition My Favourite Dress runs until 12 November at the museum, 83 Bermondsey Street, London SE1