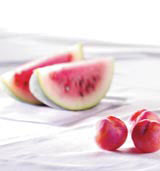 Budgens also launched a signage system, created by Martin Dawe Brand Design for a fee of around £50 000, at its new store in Cambridgeshire, last week. The system will be rolled out across 30 refurbished stores and 20 new stores over the next 12 months.

Loewy presented interiors concepts in July and is involved in a creative pitch against an undisclosed rival to implement those concepts. Loewy is still working with Budgens on the creation of a design brief for the project, says Budgens Stores marketing director Stephanie Rice.

Implementation work will be completed towards the end of next year and then some sections of the design concepts will be rolled out across the 136-strong branch network, though how many stores will be affected has yet to be decided.

‘The Tottenham Court Road store is larger than our other stores so we will only take parts of the designs and apply them to other branches where it is relevant,’ says Rice.

The signage system was unveiled at Budgens’ Soham store on 8 November and will eventually replace the company’s existing signage across much of the network. The existing signage is disjointed and doesn’t follow a single brand design, according to Rice.

‘The current system is productspecific and also dull. We wanted to create mood and atmosphere with the signage. The directional part of it is quite small,’ says Martin Dawe Brand Design managing director Martin Dawe.

There were more than 100 items of signage with individual photography required for each of the categories.

The consultancy won the work via a credentials pitch against an undisclosed rival.