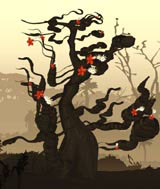 The only problem with the ICA’s festivals like One Dot Zero and What do you want to do with it? – its current digital media offering – is that you just can’t get to all of it, no matter how much you’d like to. Experience dictates that the only professional way to tackle this situation (until the ICA inherits a giant dome or something) is to pick up the programme guide, open your diary (sorry, Palm) and wangle a couple of days off work.

WDYWTDWI? is a real chocolate and a half. To bracket it a digital media event doesn’t quite do it justice though. It’s not the routine gathering of new media professionals so much as a series of art installations, experimental design projects, musical events and club nights, lectures and demonstrations, performance art, computer games and film. It won’t be interpreted the same way by any two people who go to see it.

For the design community, this festival is a chance for digital media design to redeem itself, to remind us exactly what should inspire the whole thing in the first place – innovation and creative excellence. This sort of work is rarely commissioned in the commercial market. But its influence will no doubt be seen there in the future.

Designers are going to be competing for attention with academics, musicians, mystics and monks. Last week there was work on show from the Massachusetts Institute of Technology, British Interactive Media Association commissions from Intro, AMX Networks, DNA, plus the first glimpse of work by Deepend reincarnates De-construct and The Recollective. Digit’s Feed project will also get its first real public airing in the shape of the must-see Typographic Tree installation (21-22 November). Hardware like keyboards and screens is banished in this world of artificial nature, using covert voice recognition technology to create branches of words and worlds of cyber forests.

Sadly, MIT’s John Maeda had to pull out at the last minute, but three researchers from his Aesthetics and Computation Group were on hand last week to demonstrate their work in progress, in the ICA’s small, but perfectly formed New Media Centre. Looking ahead, the festival features lectures by film director Mike Figgis, Sony Computer Entertainment Europe senior vice-president, development Phil Harrison, and by Motorola vice-president of consumer experience design Tim Parsey. There are also workshops on Web design and sound mixing.

On the art side of life, highlights include a retrospective of digital artist Mark Amerika (1993-2001), which features his experiments in How to be an Internet Artist, and Filmtext, integrating video and sound art, photography, animation and writing. Digit’s collaboration with performance artist Michael Atavar should also open a few eyes.

The festival should provide fodder for every techhead, e-Buddhist, and robogeek in the vicinity of London’s SW1. If things get bad it might begin to resemble the spaceport of Moss Isley in Star Wars, particularly around the time of the computer games exhibit Extended Play, featuring working greats like Donkey Kong and Manic Miner. And not a venture capitalist in sight.

It was a different crowd for 4 Hero’s cosy, opening club night last Saturday, which was a shot over the bows for a few club promoters and a reminder that the ICA puts on some damned fine nights too. Analogue vs Digital, pitching dub-stylee, old skool analogue kit against digital laptop electronica this Friday should also fill the house. Also check the programme for Attica Blues, Hexstatic, Kid606 and Jaron Lanier.

What do you want to do with it? takes place at the Institute of Contemporary Arts, The Mall, London SW1, until 24 November. For further information call 020 7930 3647 or visit www.ica.org.uk

Mayor of Bucharest asks you to aim at his bullseye