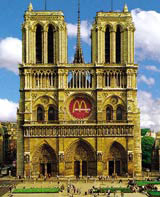 In times of brands saturation, it’s quite refreshing to see someone subverting the rules such as Ora-Ã¯to.

Forget No Logo, this is an attack to the fundamentals of consumerism at its best. By creating false ad campaigns, in which brands such as Louis Vuitton, Nike and Levi’s are seen to display totally invented, yet desirable products, the Nippo Japanese, Paris-based ‘enfant prodige’ Ora-Ã¯to, teases both the consumer and the producer. The result is an ironic, post-modern game that has appealed so much to the brand makers and shakers that they’ve actually taken Ora-Ã¯to’s tactics into their own court and commissioned him to produce imagery ‘for real’.

The transition from brand subverter to brand creator has been a quick one. ‘We had published five full ad pages displaying false 3D products from Louis Vuitton, Levi’s, Nike, Visa card and Apple Computer,’ says Ora-Ã¯to. ‘It looked like a real ad page, in which we [his studio] were trying to imagine how we could advertise future products of each brand. That made us kind of famous, because it was done without asking any authorisation. Then, Levi’s was launching its Levi’s red collection and decided it would like to be “pirated” too. That was the first piracy on order,’ he says.

Not everybody gets the game, of course, and mishaps have included fashion victims trying to order Ora-Ã¯to’s customised Vuitton bags thinking it was the French luxury house’s latest must-have model. But the big players have quickly understood that Ora-Ã¯to’s distorted logos and imaginative scenarios of a brand’s potential could be a useful arrow to have on their side. Current clients include Swatch, Adidas, Kenzo Parfum, Levi’s, the French band Air, L’OrÃ©al, e e Honda, Revillon Co, Casio, Alfa Romeo, Alain Mikli, Perrier, Pommery and Vogue.

Recently, furniture manufacturer Cappellini approached Ora-Ã¯to to produce its ad campaign. ‘Giulio Cappellini got in touch with us after he saw the Villa Gucci [an idealised, model vision of how a Gucci house might look like] in an Italian magazine,’ says Ora-Ã¯to. ‘He has a very charismatic personality, yet he is very open to new ideas and to creation in general. He offered us unexpected carte blanche. We’re now preparing the 2002 campaign, an interactive catalogue and other confidential projects.’

Non-advertising projects include a competition for the interiors of a cinema complex in Paris, the global identity and architecture of an indoor go-karting centre near Washington, the interiors and furniture for a Paris bar/ restaurant and the magazine Crash. There is also a product design collaboration with Heineken due to be unveiled in 2002.

So far, Ora-Ã¯to has had to face no legal problems connected to plagiarism. On the contrary, he is aware that his approach has been extremely helpful in providing publicity to those very brands he subverts. ‘The brands I’ve been working on have really no interest, in terms of their image, to bring a legal action upon a young virtual designer who is just expressing his vision of that specific brand through an artwork that has no commercial counterpart,’ he says. ‘It is not like if I’m really manufacturing products using their names and logo. The whole piracy thing started by buying an ad page that costs around £9000. This is nothing compared to the costs of getting coverage in international press, TV, via museum exhibitions or websites. It is almost like offering them a global and unconventional communication campaign for free.’

Far from being accused, Ora-Ã¯to is now fÃªted by the media and heralded as a communication guru. Asked how he feels about becoming a media phenomenon when he has made his career out by being irreverent towards that whole world he says, ‘I don’t really feel like a media phenomenon because that would mean that Ora-Ã¯to is a flash in the pan. I’d rather say that my work is now under scrutiny although it is not especially meant to be. What I am now waiting for is someone to pirate Ora-Ã¯to. That would be a great honour because it would mean I have become famous enough to inspire someone. I’d love to see some young artist or designer play with my brand like I did with Vuitton and Nike.’

Not that he’s passed it in terms of age either. At 22, with a definite talent for invention (even his name, Ora-Ã¯to, is a mix between an anagram of his name, and a play on the word aura), Ora-Ã¯to prizes himself on surrounding himself with similarly young and talent collaborators. He cites among his influences the Bauhaus movement, kynetic art and the space age, and defines his studio as ‘a spaceship exploring different artistic concepts.’

The studio’s latest collaboration is with photographer Arnaud Bani on an amusing futuristic scenario in which Parisian landmarks such as the Eiffel Tower and the Sacre Coeur have been sold to corporations to pay off the public deficit. A series of postcards depict the monuments made captive by rampant symbols of capitalism such as McDonald’s and Disney. Judging by his visions of an opera house sponsored by Virgin, one can’t help hoping this globalised future will remain a virtual dream. m