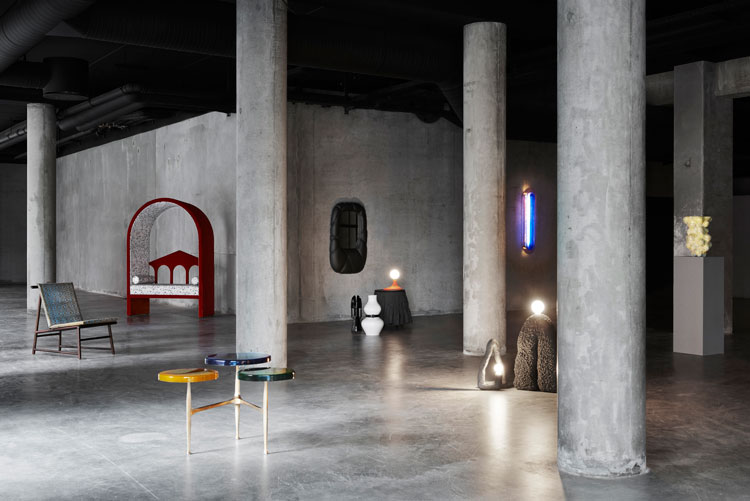 The London Design Fair trade show has opened its doors for 2019, hosting work from across the world in east London’s Old Truman Brewery.

This year sees the return of Design Fair staples like the Material of the Year exhibition and various Country Pavilions. Also included in the line-up are several new additions, including the International Craft Pavilion, which replaces the British Craft Pavilion from previous years.

Sustainability seems to be the underpinning theme of this year’s event; across the three floors of the show, it’s easy to see how designers or both products and the exhibition itself have been influenced.

Returning to the Design Fair for the third time, this year’s Material of the Year draws attention to the world of biomaterials. Developed most commonly from the by-products of the world’s agricultural industries, biomaterials can minimise the waste caused by food production.

From Chip[s] Board creating plastic alternatives made out of potatoes, to High Society crafting lighting fixtures from the waste of tobacco and wine production, this year’s showcase – collectively titled as Second Yield – is a weird and wonderful collection.

Among the most aesthetically pleasing is the work of Mexican designer Fernando Laposse. His work, Totomoxtle, uses endangered species of Mexican corn to create a patchwork veneer material.

“Unfortunately, in the last 25 years, and mainly because of a trade agreement with the US and Canada, we’ve been losing all of our native varieties [of corn],” he says. “And the people who are the most affected by this are indigenous communities.”

Laposse has collaborated with small communities in his native Mexico and the world’s largest seed bank to reintroduce these endangered corn varieties, which can then be grown for food and its waste used for Totomoxtle.

Housing the work of 13 different exhibitors, the Swedish Design Pavilion itself is a sustainable and eye-catching piece of design. Created by the team at Förstberg Ling, the maze-like space is made entirely out of sustainable Swedish wood.

The mini exhibition uses the untreated natural grain of the wood and exposed nails as decorative elements, whilst the 45-degree panels supposedly encourage visitors to follow their eye line to other parts of the show.

“One of the challenges was to be able to showcase each exhibitor as its own, but still have a coherent space,” says Mikael Ling, co-founder of Förstberg Ling. “We’ve designed the space to encourage mingling between the exhibits.”

Come Sunday, when the London Design Fair ends, the pieces will be dismantled and shipped over to Sweden for another exhibition.

Housed at this year’s Guest Country Pavilion is the United Arab Emirates. The exhibition, curated by the Irthi Contemporary Arts Council and the NAMA Woman Advancement Establishment, features 12 works made by women using a range of artisanal and traditional crafting techniques.

The exhibition space itself has been designed to emulate the landscape of the UAE, using wood and camel leather primarily for the design. The showcased work includes traditional sand casting, safeefah (a type of basket weaving) and talli (bobbin lace weaving).

The works are particularly impressive owing to the fact many of the crafting practices are in danger of being lost altogether. “We’re helping to preserve dying crafts, whilst also supporting women,” says Reem BinKaram, director of NAMA. “This event showcases the weaving together of education and creativity.”

London Design Fair takes place between 19 – 22 September as part of London Design Festival, at Old Truman Brewery. Tickets are priced at £15 for trade and public.