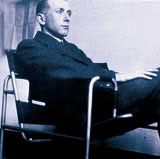 WHO: Hungarian-Jewish designer who pioneered modern furniture design at the Bauhaus in Germany in the Twenties, later a key figure in Modern architecture as a partner of Walter Gropius and a member of staff at Harvard University’s School of Design.

WHAT: As a young master in the furniture workshops of the Bauhaus, Breuer bent tubular steel into seating and exhibited the Wassily chair for the first time in January 1926. The rest is design history.

WHERE: Everywhere. First Vienna, where he won a scholarship to study at the Academy of Arts, aged 18. Then the Bauhaus in Weimar, followed by the Bauhaus in Dessau, followed by Berlin. Budapest and Switzerland also figured on Breuer’s itinerary. New York later became his powerbase, having reached America via London, where he briefly opened a design office with FRS Yorke (founder of the multidisciplinary design consultancy YRM).

WHY: Amid the political ferment of the Weimar Republic, Breuer wanted to cast aside bourgeois, decadent, decorative interior style. Tubular steel, a material around since the 1880s, but never used before for interior design, was ideal to express the radical modernity of new living. Breuer’s motivation was also entrepreneurial: he formed a company, Standard-Mobel, to produce his furniture. (Standard-Mobel was sold to Thonet in 1928).

ICONS: Aside from the Wassily chair, Breuer is remembered for its predecessor, the Woodslat Chair and for the plywood Isokon Longchair, which was made by Jack Pritchard’s Isokon in the UK in the late Thirties. Then there is the post-war architecture, chiefly an obsession with concrete, epitomised by the Unesco building, Paris, 1953.

INFLUENCE: An entire generation of furniture designers and manufacturers worldwide who could see the benefits of simple, modern, mass-produced design.

ODDBALL: Breuer’s business dealings while teaching at the Bauhaus brought him into conflict with his boss, Walter Gropius. The row over whether a tutor should practise design commercially on the side resulted in compromise – but set a tone for similar fights in every art school over the next 80 years.

SOUNDBITE: ‘Not only are his designs of great quality in themselves, but he helped make fine furniture design affordable to the mass of people’ – Terence Conran.

Marketplace spreads the word for the BMS