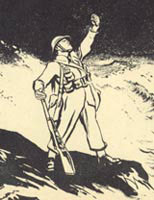 Political cartoons and caricatures from the acerbic pen of Sir David Low comprise the first exhibition since 1843 to be held in Westminster Hall – site of the Queen Mother’s lying-in-state. Designed by Michael Green as part of the Queen’s Golden Jubilee celebrations, the show provides a graphical history of the main events of 20th century politics from the 1920s-1960s. Now seen as one of the greatest political cartoonists, Low was an implacable opponent of Hitler, Mussolini and Stalin during the 1930s and of British attempts at appeasement. Later, his cartoons, with titles including ‘Very well, alone’ (right), were a vital part of the war effort.