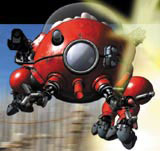 A showcase for French digital media will take place at Onedotzero_fr, held at CinÃ© LumiÃ¨re, at the Institut FranÃ§ais later this month. The festival explores forms of moving image across music video, motion graphics, new media and graphic-inflected narrative shorts. Pictured is AP2000, an animated story by Loic Bail and Aurelien Delpoux about a bug living an ‘idyllic, parasitic life on the back of a pet dog’, before being attacked by ‘manga-style killing machines’. Onedotzero_fr runs from 24-26 September and is organised by the Onedotzero digital film and animation network.

Pretty as a picture