The V&A Museum of Childhood has unveiled its vision for the future as it prepares for a £13 million redevelopment project beginning in the Spring.

With the announcement, three new permanent gallery spaces have been confirmed and the building’s hotly anticipated architectural plans have been revealed.

Aiming to re-centre itself “at the heart of the V&A”, the museum’s updated programme will include interactive galleries, multisensory environments and contributions from high-profile creatives including Olafur Eliasson, Virgil Abloh and Yves Béhar.

These spaces, alongside a new welcome area and main hall, have been designed by east London-based studio AOC Architecture. 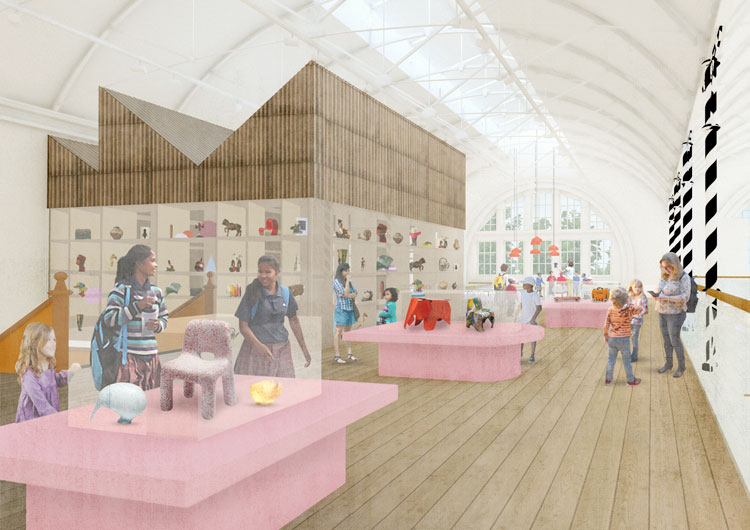 At the centre of the redesigned museum will be three new permanent galleries, Imagine, Play and Design.

These spaces, according to V&A director of design and FuturePlan Philippa Simpson, set out to provide “a more exciting, a more meaningful and a more comfortable experience” for the museum’s 0-14 target audience.

The Imagine gallery will encourage young people to create and explore their own narratives by leading them through a series of spaces “designed to set the imagination free”, according to Simpson. It will come complete with an upside-down Alice in Wonderland-style room, and a model town featuring the museum’s National Collection of dolls houses.

Meanwhile the Play space will encourage the development of children’s motor skills with a series of interactive displays and games, from chess and card games to mobile apps like UsTwo’s Monument Valley.

Aimed at older visitors, the Design gallery will house the museum’s relaunched artist-in-residency programme, The Designer’s House. It aims to provide space for creatives and young people to work together and will feature examples of contemporary design like Olafur Eliasson’s Little Sun and the Micro Scooter. 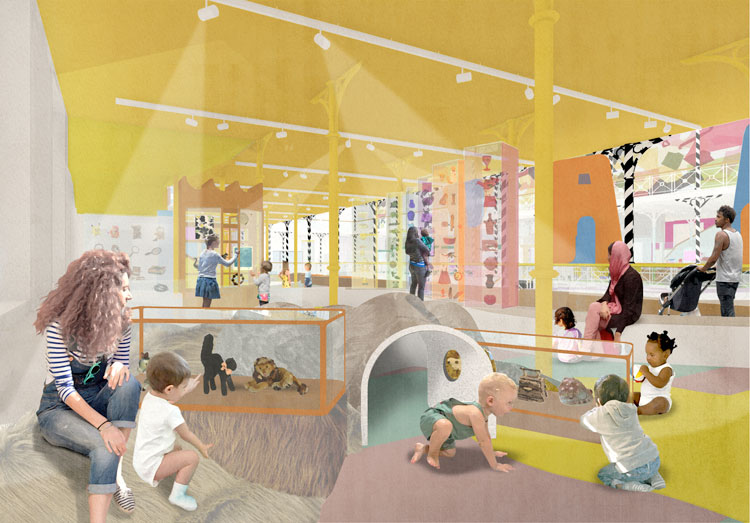 The creative team has worked to reimagine the visitor experience, focusing on “curiosity and a spirit of collaboration, through spaces for intergenerational play and creative experimentation”.

This will include a newly developed 125-capacity performance area known as the Stage, which the museum says will act as the centrepiece for its daily programming.

Elsewhere, plans for the Bethnal Green-based Grade II listed building have been developed by De Matos Ryan. These plans will create more public space, a new ‘Kaleidoscopic’ staircase and a series of learning studios. 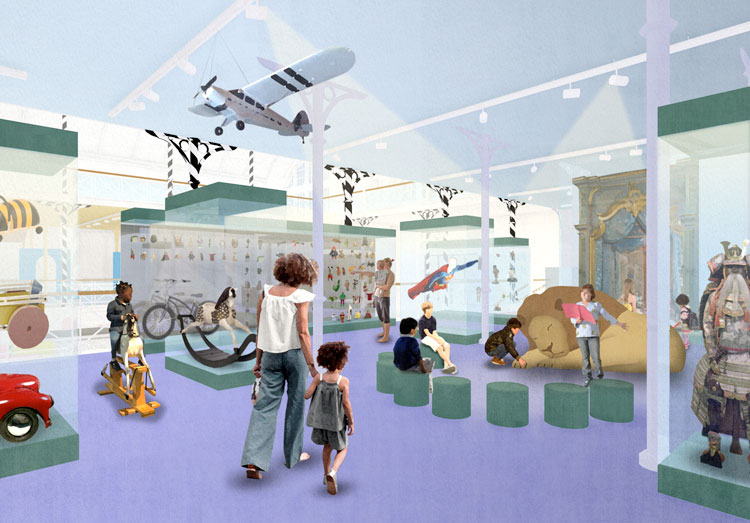 “The need is urgent”

The new spaces and wider redevelopment represent a strengthened sense of direction for the museum, according to Simpson.

“[The museum] is a much-loved institution, locally and nationally, but it no longer serves the needs of our audiences as well as it could,” she says.

“The big shift made by the current project is to rethink what is of most value to today’s young visitors – what purpose can the museum usefully serve in the 21st Century. We know that, within a growing landscape of cultural offers, museums must adapt to the changing world to remain relevant.”

This is particularly crucial, Simpson adds, in a time where funding for the creative arts and design are lacking.

“The need is urgent,” she says. “It is critical that the V&A – with its wealth of objects, expertise and imagination – opens up this world of possibility for the young. Those who may never have thought to go to a museum will understand that all of this really does belong to them.”

The V&A Museum of Childhood will operate as normal until 11 May 2020 and will reopen again with a programme of opening events in 2022.

A two-year partnership between the V&A and the Idea Store Whitechapel will launch in May 2020 to provide a free programme of activities in the meantime. 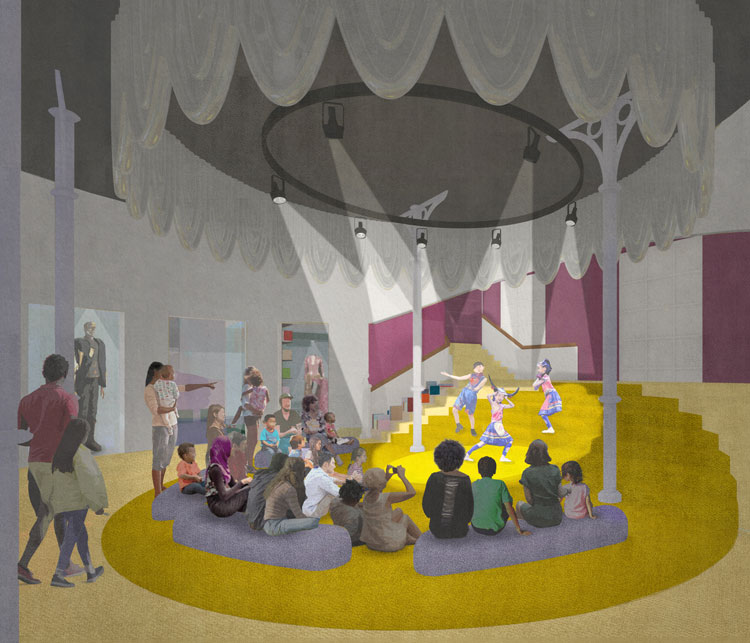 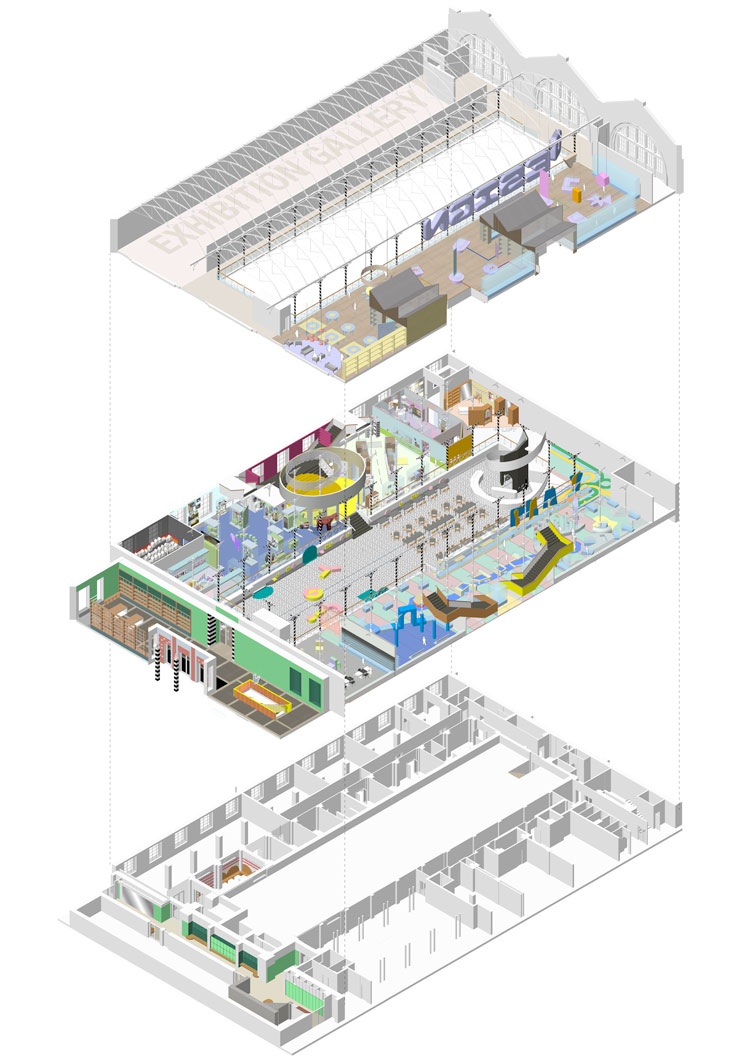