The Royal Opera House (ROH) is throwing open its doors following a massive refurbishment, which aims to “open up” the space to the public.

Unlike before, these spaces will be open to the general public to come in to use throughout the day, and not just to those with tickets to shows.

Free performances will also take place in the new foyer spaces, which according to the ROH will offer more people the chance to experience what they offer.

The new 400-seat Linbury Theatre was also created as part of the project, providing a second, more intimate performance venue.

Stanton Williams was appointed after winning an international architectural competition in 2012 for a design that would “open up” the building so it would mirror the ROH’s cultural aspirations for the future, according to Alan Stanton, founding director at Stanton Williams.

The architect tells Design Week: “The opera house had been changing its culture to become more open-facing. It was searching for new audiences, wider audiences, younger people… They thought their building, though massively improved by the [last refurbishment] scheme in the 1990s, was perhaps slightly too introverted and exclusive.”

The architecture firm set out to “literally open up the building” through structural changes such as knocking down solid walls on the Bow Street side, letting passers-by see inside through glass windows and by creating large “welcoming” foyer spaces.

“Internally, we have liberated spaces for non-formal activities throughout the whole day, not just the evening. There will be performances, you can come have lunch, tea or supper in the spaces and listen to a talk, a recital or a performance,” Stanton says.

“We hope it will become a real destination for people visiting London and the West End, not just necessarily those coming to see the opera or ballet – but we hope they will become engaged with opera and ballet from visiting the building.”

Key materials throughout the redesign include American black walnut timber, patinated brass, polished plaster and Spanish marble flooring. “They are fairly traditional materials that we have used in a very 21st century way in terms of form and detailing,” Stanton says.

The largest challenge, he adds, was “doing all the work over three years without losing a single one of the 996 performances or any rehearsals”.

The original building was built in 1858 based on designs by E.M. (Edward Middleton) Barry and a major extension and refurbishment was carried out in 1999. The current rebuild by Stanton Williams focused on the entrances to Covent Garden Piazza and Bow Street and the interiors between the two on the ground and lower floors.

The ground floor previously contained a box office, large cloakroom area and women’s toilets. It was compared by the architects to a “street”, which people simply queued in and passed through as they made their way elsewhere in the building.

Rawden Pettitt, associate director at Stanton Williams, says: “The experience you had was about moving, it wasn’t about stopping… get your ticket, put your coat in [the cloakroom] and move into an actual space.”

More space has been created by moving the toilets downstairs, relocating the staircase and disseminating the cloakroom over other floors. A double height space overlooked by a balcony has been created, which can be used for performances.

The new open-plan space includes open-plan seating space, displays and exhibits which include theatre costumes, a projected video screen, and a display detailing how the refurbishment happened.

The box office has been removed entirely so there would no longer be a ticket line. Pettitt says: “People hosting you will be greeting you at the door. The majority of tickets are sold online now.”

The Covent Garden side entrance has been transformed with curved glass and big video screens showing clips from performances looking out into the piazza.

The Linbury Theatre, which has wooden interiors and purple fabric seats, will be home to a new programme of performances, in a more “intimate” setting.

The new theatre has been designed to be “characterful, warm, welcoming and technically high spec [specification]”, complete with new lighting, acoustics and staging devices.

“The shape of the theatre is a kind of horseshoe that creates a very intimate relationship between the audience and the stage,” Stanton adds. It is designed with “flexibility” in mind, allowing for it to be modified for “in-the-round” performances, where the audience sits on at least three sides of the stage, shows with an orchestra pit or other set-ups.

A new “flexible” open-plan retail space designed by Drinkall Dean interior design studio, allows the shop to grow and shrink as needed as there are no longer walls or doors separating it.

The design has a few distinct features nodding to the theatrical use of the building. Shop units are on grand piano wheels creating a “poised” look, according to the studio’s co-founder Angela Drinkall, wooden benches for merchandise nod towards equipment found in a ballet studio, and book displays are shaped similarly to music stands.

“We want to encourage people to browse and enjoy the retail experience, and take away a memory, a little piece of the Royal Opera House,” Drinkall says, adding that she believes the new shop will “increase sales”.

A launch advertising campaign was designed by Dave Henderson at Atomic London as part of the brand positioning to make the ROH more accessible.

The varied programme of events coming up at the ROH include Juliet & Romeo, a subverted take on the Shakespeare classic, the Young Talent Festival, showcasing young dancers and a weekend festival called Engender exploring the roles of women in theatre.

The ROH will host a variety of daytime performances, tea dances, a programme for under five-year-olds and a Month of Sundays, which includes family friendly activities.

Jillian Barker, director of learning and participation at the ROH, says the programme was partly about “introducing the next generation to these wonderful art forms.”

“Come and get immersed in our world, that’s what we’re trying to get out there,” she says.

Alex Beard, CEO at the ROH, adds that he hopes the project will help shift the perception of the institution as being “elitist” but will maintain “the sense of being special and extraordinary”, as it continues to have “elite” level performers on its stages. 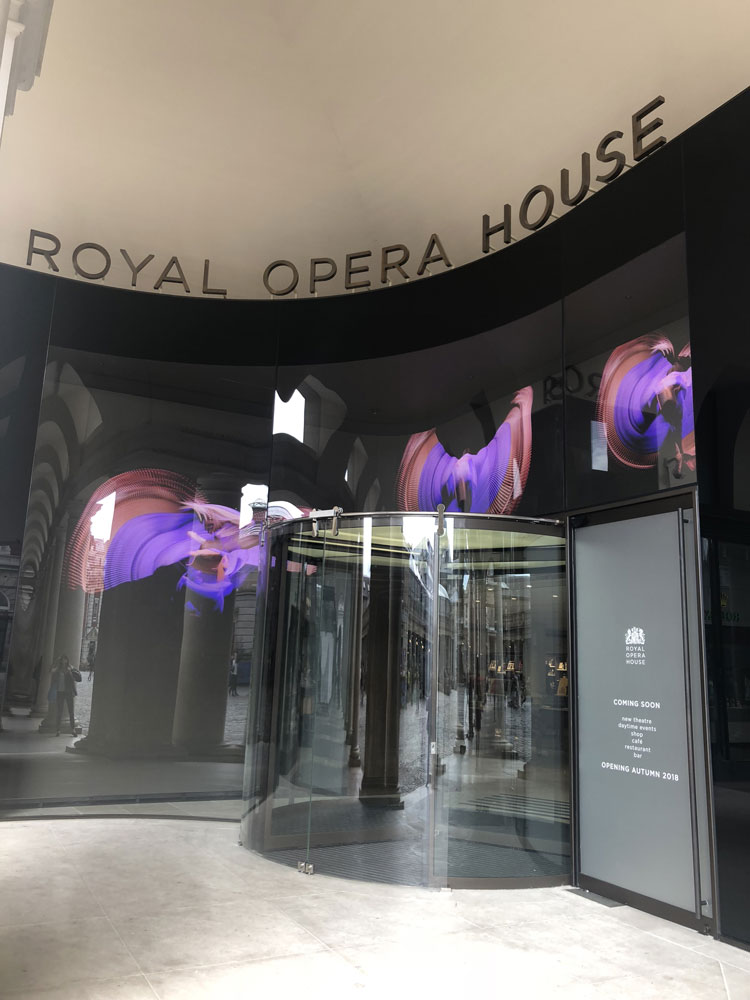 Uber rebrand looks to reflect how the taxi app is “changing”