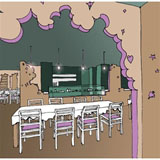 Upmarket homeware chain Heal’s plans to embark on a substantial refurbishment programme across all of its stores, following the major relaunch of its flagship in London’s Tottenham Court Road next month.

A bakery and a restaurant, collaborations between restaurateur Oliver Peyton and architect and design consultancy Fat, are at the heart of the Bloomsbury store’s new concept. A spa room, expanded fabric and lighting departments and sections for children’s furniture and storage are among other changes.

The plans are being overseen by Heal’s visual merchandiser Patrick O’Connor, and will see the retailer turn away from its contemporary look in favour of a range of idiosyncratic new features, products and departments, according to a company spokeswoman.

‘A contemporary store starts to look a bit tired after five years,’ she says. ‘We felt it was all getting very contemporary/ modern and bland – too much pale wood and that type of thing – so there are lots of things in the new store which hark back and are a bit retro – we have got a Louis XV chair, for instance – but all done in a modern way.’

Fat has designed the interior for the restaurant, Heal’s Meals, which hopes to establish a link to traditional British values. The design concept features an oak floor, moss-green walls, upholstered seating and oak fretwork, aiming to evoke an English woodland. The bakery, Peyton & Byrne, is located at the entrance to the store.

No timescale has been set for the refurbishment of Heal’s other stores – in Chelsea, Kingston, Guildford, Manchester and Redbrick Mill, West Yorkshire – though the overhaul comes as Heal’s approaches its bicentenary in 2010.

Last August, Heal’s reviewed its identity for the first time in 20 years. Lippa Pearce designed an identity in keeping with the chain’s ambition to mount a challenge to rivals such as Habitat (DW 25 August 2005).

Networks are the way ahead