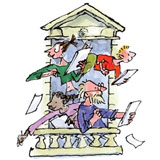 Illustrator Quentin Blake is putting together plans to launch a £5m illustration gallery in London within the next four years, with a venue in King’s Cross under consideration.

Blake is currently looking at a number of other sites for a gallery that will display his private archive of more than 3000 illustrations, as well as the possible loan of collections by organisations such as the Victoria & Albert Museum and the British Museum. The gallery would also run travelling exhibitions, operate learning programmes and would have a community focus, he says.

The Quentin Blake Gallery of Illustration has been set up as a charity to help establish the gallery, although this name will not be used for the final venue, Blake confirms. ‘At the moment we are reviewing the name. The gallery is about historical and international illustration of all kinds. We want to explain illustration to everybody and show the history of it, telling its story,’ he says.

A fundraising campaign has not yet begun, but project manager Claudia Zeff anticipates that the gallery will not cost more than £5m. The Arts Council funded a feasibility study into launching the gallery in 2004. ‘We will be happy with something of a domestic scale because of the size of illustrations, which will sit nicely within such a space,’ says Zeff.

An architect and exhibition designers could be appointed to work up schemes for the gallery, working with Blake, but it is ‘very early days’, according to Zeff. A website designed to promote the gallery is being developed by Bob Design and is due to launch within the next few months.

A board of trustees and a panel of advisors, including architect David Adjaye, are advising on the gallery’s direction. A business development plan is currently being completed and a development director is expected to be appointed ‘within months’, with a gallery director to follow, according to Blake.

Blake has illustrated nearly 300 books with writers including Joan Aiken, Michael Rosen, John Yeoman and, most famously, Roald Dahl. He taught at the Royal College of Art, where he was head of the Illustration Department from 1978 to 1986.

• Name and venue under consideration

• Development director and gallery director to be appointed