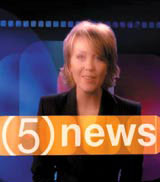 Channel 5 has relaunched its 5 News programme this week, with fresh graphics by Ortmans Young International and set redesign by Jago Design.

It is the first time the channel has restyled the look of its news coverage since it launched in 1997 with a ‘perching’ newsreader.

OYI was briefed to refresh the programme graphics and ensure that consistency was achieved with set design. It has redesigned the 5 News identity, title sequences and break bumpers. The service now displays a ‘news bug’, the 5 News logo, in the corner of the screen for the duration of the programme, a first for a terrestrial news service.

‘[Channel] 5 news is the closest to a satellite rolling news service with the highest frequency of news of any terrestrial channel, so it made sense to brand it with an on-air bug to establish clarity,’ says Ortmans Young International creative director Marc Ortmans.

‘We’ve consolidated the news values established during the past five years. The new image projects these values through an assertive, revitalised brand identity,’ he adds.

Jago Design was briefed to create something modern that reflects the ‘maturity of the channel’.

OYI won the work without a pitch. Jago Design was appointed following a creative pitch against undisclosed rivals.