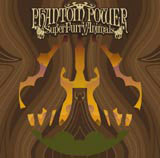 Released next Monday is Welsh band Super Furry Animals’ latest album, Phantom Power. It is the band’s second album to be produced simultaneously on both DVD and CD formats following the success of 2001’s Rings Around the World. Film and animation is created by NoBrake, which has provided animated sequences that ‘tell the story’ of each of Phantom Power’s 14 tracks. NoBrake has also designed the album’s website, www.phantom-power.com, exclusive areas of which can be accessed via the DVD. Long-serving Super Furry Animals’ illustrator Pete Fowler, whose clients also include clothing label Paul Smith and Sony PlayStation, designed the sleeve for the album.