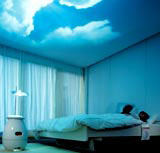 The New Nomads programme from Philips Design was kick-started in 1998 by research at its Redhill laboratories examining the possibilities of embedding technology in clothing and textile fibres. A design team was formed bringing together product engineers and textile designers ‘to challenge assumptions and the laws of physics’ as Nancy Tilbury, design consultant at Philips Design says. From this sprang a joint venture with Levi’s industrial clothing division, which worked with Philips Design during 1999 to design range of clothing that would reflect Levi’s heritage of clothing for workers.

Questions were asked about what workers in the new millennium would require from their clothing and the first ICD ‘technology-toting’ range of clothes was launched in autumn/ winter 2000. The spring/ summer range is now in the stores. But for Philips Design, the project is far from over. An intelligent fibres division has been set up charged with developing embedded functionality. Currently, a wide range of applications have been considered, including jackets with integrated MP3 players and air hostess uniforms incorporating personal digital assistants with flexible liquid crystal display screens on the sleeve, using woven conductive threads that ‘merge tradition and technology’.

At April’s Milan Furniture Fair, Philips Design continued its exploration of the future with Smart Connections, an exhibition presenting the latest working prototypes which displayed Internet-based technology as well as smart textiles. Star of the show was the Nebula bed, an interactive projection system designed to enrich the sleeping experience. A ceiling projector is linked via the Internet to a database of content, and the images change randomly according to the body’s movements throughout the night.

Other projects on display were LiMe – Living Memory, a computer-based system to increase community formation and sharing of knowledge, and PoGo, a digital media system which intertwines physical and virtual media for the benefit of school children.