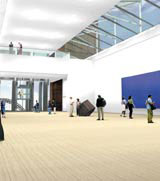 Baltic, on the banks of the River Tyne, has been a long-time coming. Architect Dominic Williams of Ellis Williams was appointed to convert the former flour mill into a contemporary art centre back in 1994, and even though it’s now just a few months away from opening, director Sune Nordgren and artist Julian Opie are still in discussions over the final form the signs will take.

Opie’s involvement as creative consultant is an unusual one. Initially invited to advise on the building design because of his extensive experience as an exhibitor in galleries worldwide, Opie has ended up involved in everything from furniture to signage.

For the latter, he is devising a series of metal spray-painted road signs to be placed around the city on routes to Baltic, gathering in density as they near the building.

The unconventional approach to the signs reflects his status as an artist. ‘It’s about blurring a view of what’s an artwork and what’s a sign,’ explains Nordgren.

The roadsigns won’t bear the name Baltic, but will instead feature graphic images by Opie designed to have ‘indirect association with Baltic’ and stimulate curiosity, Opie says.

Non-domestic, urban animals such as hedgehogs and foxes, ‘innocent’ of involvement in urban planning, but nonetheless still associated with that whole sector, will grace the signs, says Opie. The animal images will initially be a ‘question mark, which will then be answered when visitors get to Baltic and see more of them [the signs],’ he adds.

On the outside of the building itself, no new signs are needed as the name Baltic is still visible. Swedish typographers Ulf Greger Nilsson and Henrik Nygren helped develop a suitably rough, industrial typeface to suit the building, adapting a 1940s wooden-block print called Affisch into the museum’s own typeface Baltic Affisch.

‘It’s basic, almost anti-design,’ says Nordgren, who expects this approach to be reflected in the internal sign system, which will be developed in-house in conjunction with Opie to complement the interiors by Swedish designer Ake Axelsson.

Opie has suggested some freestanding directional signs with safety signs applied directly to walls, but details will be finalised between now and the opening in July.