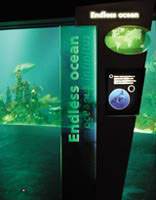 Branding and identity: The Core Design

Billed as the world’s first ‘submarium’, the £45.5m The Deep opened in March in Hull and tells the story of the oceans from the Big Bang to present day to the future. Highlights include seven varieties of shark and a lift journey into the deepest tank in Europe.

The anticipated 250 000 visitors per year will be guided around the Humberside building by signs designed by The Core Design, also based in Hull, and around the exhibition and tanks themselves by graphics from John CsÃ¡ky Associates.

The Core’s design solution evolved from its work establishing The Deep’s brand identity. Key components of this are a dot matrix logo with six bubbles rising up from the last letter of the name, a graduation of colour from pale to dark blue to suggest ocean depth and nine images of key organic ocean-related textures. But you won’t find any reference to this identity attached to the outside of the Terry Farrell & Partners-designed building.

‘The building is its own signage. We were in total agreement with the architect that there should be no signs attached to it,’ says The Core managing partner Peter Melling.

Instead, the Core came up with a 6m by 2m standalone sign on the entrance road to The Deep bearing the logo topped by a polished stainless steel ellipse containing a stylised graphic image of the building – a motif also used by staff as pin-badges.

‘The client wanted an icon,’ explains Melling. ‘The concern was that the brand was more corporate than visitor attraction and the client wanted something more consumer-facing.’

For the inside of the 7200m2 visitor attraction, The Core devised a straightforward sign system of light blue acrylic panels with white vinyl lettering in Gill typeface, framed by polished aluminium strips.

‘We have tried to keep the internal signage as simple as we could because it’s quite visually noisy in there,’ explains Melling.

The consultancy did, however, allow itself a little fun. Taking its cue from the six bubbles rising out of the corporate identity, The Core supplemented the Gill Sans font used on the sign for sub-branding the toilets with images of six pennies. For the first aid room sign, the pennies are replaced by a series of round Elastoplasts and for the cafÃ©, coffee beans.

Away from the main public areas, and within the £4m permanent exhibitions, graphics and orientation are by John CsÃ¡ky Associates. At the entrance to each section are 2m-high freestanding ‘graphic portals’ with the title of the area, such as Coral Realm and Lagoon of Light, running vertically up the side – the portals are large-scale in response to the lofty size of each space.