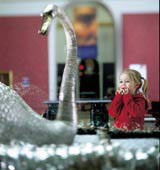 Museums and galleries throughout England are to share a £4m fund raised by the Department for Culture, Media and Sport and the Wolfson Foundation to help improve displays and facilities.

Forty institutions have been selected in the latest round of funding, each winning grants of up to £250 000. The awards are part of the Galleries Improvement Fund, which has donated £12m to 65 institutions around the country since it was set up in 2002, including a £1.1m endowment to six museums in London last August (DW 12 August 2004).

Design projects to benefit from the money include plans by the Shipley Art Gallery in Gateshead to produce a display titled Designs for Life. A £145 000 award will help create the display, which is to examine the use of art and design in everyday objects.

The Shipley project will include interactive and multi-sensory exhibits, teaching visitors about the items on display, while film and video installations will offer an insight into the making of the objects. A designer is yet to be appointed to the work, although gallery curator Andrew Heard says he is speaking to a range of people, including local teachers and lecturers, in consultation for the display.

Bowes Museum in County Durham will receive £100 000 towards its planned Silver Swan Experience, a new gallery dedicated to the museum’s iconic solid silver musical automaton (pictured). As part of the gallery’s refurbishment, the funding will also help install information panels, touchscreens and other interpretational features, according to The Bowes Museum director Adrian Jenkins.

A tender for design work for the Silver Swan gallery will be advertised shortly, with installation beginning next year, for completion in 2007. The swan will sit as the gallery’s centrepiece, accompanied by other objects from the museum’s silverware collection.

‘We will work with visitors, especially schoolchildren, to make sure that accessible interpretation features are included which engage and educate audiences,’ says Jenkins.

The Victoria & Albert Museum of Childhood in London’s Bethnal Green has been awarded £150 000 and is to develop a 750m2 Creativity & Imagination gallery, as part of a larger redevelopment beginning in October. The museum is working with architect Caruso St John on the gallery designs and Kerr Noble on graphics for the scheme, which will also see the creation of a Moving & Optical Toys gallery.

Other funding recipients include the National Museum of Photography, Film & Television in Bradford, awarded £200 000 for gallery redevelopment, and the Design Museum in London, awarded £52 800 to improve physical access.

â€¢ Fund set up in 2002 for national and regional institutions