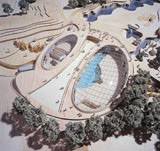 Design with a non-human focus is under the spotlight this week, following a surge of creative interest in all things zoological.

Last week plans for Copenhagen Zoo were unveiled, including a new-build shelter due for the zoo’s herd of Indian elephants. Foster & Partners has been appointed to tackle the animal accommodation, due to be completed in 2006, and an appointment is expected next year for the zoo’s exhibition work.

The project comes hot on the heels of CsÃ¡ky Associates’ identity work and ongoing refurbishment of Blackpool Zoo’s visitor areas.

So why the renewed interest, and what considerations are designers taking on board these days?

Unsurprisingly, given Foster and Partners’ body of work, Copenhagen Zoo’s elephant house will be a world away from the usual dark, sturdy boxes – from which the inhabitants occasionally emerge to the delight of binocular-wielding spectators.

According to Copenhagen Zoo director Lars Lundig Andersen, who approached the group with the work in November 2001, the new house will create a pleasant setting for the animals, and [ensure] that visitors have a good experience’.

It will comprise two ‘generous’ glass domes, ‘with open space, lots of light and underfloor heating’, Foster and Partners partner Spencer de Grey says. The divided structures will allow female elephants and their young to stay together, while the bulls live apart, as they would in the wild, he adds.

Both buildings will be surrounded by terraces and will also incorporate promenades, enabling visitors to view the elephants as they shelter and roam in outdoor areas, says de Grey. These will be designed by Danish landscape architect Stig L Andersson to mimic the natural habitat of the animals.

Earlier this year, Blackpool Zoo also embarked on a revamp of its site (DW 24 June). It appointed CsÃ¡ky Associates to refurbish the zoo’s visitor areas, look at currently unused areas of the zoo, and update Amazonia – a tropical bridge walkway with South American plant life and free-roaming primates and birds.

Like its counterpart in Copenhagen, Blackpool Zoo is keen to ‘create a naturalistic environment for the animals, build a better viewing environment and encourage closer interactivity, so you understand conservation before you leave the zoo,’ according to its head of marketing and communications Tony Williams.

So will zoos of the future be more design-led, as proprietors seek to meet creatures’ – and visitors’ – requirements?

De Grey is not convinced that this is a particularly new trend. ‘Zoos over the years have attracted well-known architects and designers,’ he says, pointing to London Zoo, where Tony Armstrong-Jones, Tecton architectural practice led by Berthold Lubetkin and Sir Hugh Casson’s influence over the past 70 years have developed creature- and viewer-friendly structures.

‘But that doesn’t happen everywhere,’ he adds. ‘Often the buildings, terraces, and environments can be tacky. They don’t add anything to animal welfare or to visitor enjoyment.’

Either way, Williams is convinced that zoo management will increasingly look to designers as they come to understand animals’ needs. ‘Our prime concern is looking after the animals in our care [and] creating the best environment for [them]. Designers can help us to do that,’ he says.

Andersen agrees that zoos are ‘moving in that direction’. He says designers can do a great deal to ‘enrich animals’ lives and create environments that will stimulate natural behaviour’. But he also points out that it plays a vital role as zoos more often look to ‘tell a story about conservation and the problems in nature’.

‘It’s important to find the kind of environment where people believe the messages [we are] trying to tell them,’ Andersen says. ‘The quality of design in graphics and architecture must be superb.’

Copenhagen Zoo approached Foster and Partners with the work in November 2001. De Grey say the group is still in the ‘outline stages’, but he expects work to begin on-site within 18 months.