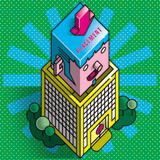 The size of Design House – it has 25 staff – attracted Kronfuss, as he believes he’d be ‘less likely to get involved in the creative side of projects’ at a larger consultancy.

Kate GallÃ©, 23, a designer at Landor Associates, added brownie points to her CV with a year’s paid placement at Marks & Spencer, during her third year at Somerset College of Art and Technology. She was paid £16 500 for work in M&S’s packaging department in London.

‘The most important thing I learned was how a studio operates,’ says GallÃ©. ‘I wasn’t doing much creative work, but the placement gave me confidence.’

During her final year at Somerset, her peers had a professional designer from Landor review their portfolios. He knew people at M&S she had kept in touch with, and GallÃ© in turn kept in touch with him. She subsequently worked a three-month placement at Landor.

GallÃ© continued to contact consultancies she wanted to work for, and even had interviews during her Landor placement, which the group ‘didn’t mind at all’, she says. During her course she’d also had placements at The Chase in Manchester and Blue Marlin in Bath.

GallÃ© was invited to join Landor after her placement. The packaging work she does is ‘less ideas-based than I’d like’ at the moment, but she doesn’t find Landor too large, as it’s split into small teams. ‘I often get e-mails about people in Landor offices over the world who I’ve never heard of, but you sometimes have to let these things wash over you,’ she notes.

Her advice to young designers? ‘Do as many work placements as you can so you lose your nerves – they are humans too. And if your CV isn’t working, keep improving it.’

Landor creative director Derek Johnston says GallÃ©’s approach is the right one. ‘We don’t usually offer graduates jobs straight away, but pay them to come on placements,’ he says. ‘That way, they can see if they like us and vice versa.’

Johnston says Landor has ‘good’, but not exclusive, relationships with colleges, particularly Kingston and Somerset. ‘Colleges often have life-cycles, where there is a glut of talented students. It’s often down to the tutors there at the time,’ he says.

But Johnston dismisses the common perception among students that ’boutique consultancies’ are better to work for because there will be more creative work. ‘We’ve had students come to us from smaller groups, saying they have less authority and control there.’

As Williams – a veteran of the industry – points out, finding a job is difficult, but by no means impossible. ‘You have to give people a chance. I had to get a job once as well.’