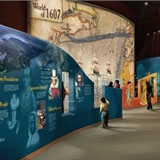 A £26m visitor centre revealing the remains of the first permanent English settlement in North America is unveiled in the US this month, featuring a £2m masterplanning, concept design and installation by Haley Sharpe Design.

The Leicester consultancy was appointed six years ago to carry out the project for the US National Park Service and APVA Preservation Virginia. It has developed the ‘visitor experience’, including interpretative exhibits and an audio-visual theatre for the Historic Jamestown centre, which is opening in phases between now and November.

The settlement in Jamestown, Virginia was founded in 1607 and the visitor centre will be the focus of the 400th anniversary next year.

‘We were conscious of the need to open up Jamestown Island to new interpretations of early colonial history and engage a wider audience of visitors with a more diverse range of cultural perspectives,’ says Bill Haley, senior parner at Haley Sharpe Design. ‘Our design concept weaved together extensive artefact collections, historic landscapes, ruins and ongoing archaeological investigations with interpretative media.’

As only one original 17th century structure remains above ground on the site, the consultancy has employed ‘augmented reality’ technology to allow visitors exploring the archaeological site to compare the present-day landscape with a computer-generated version of its historic appearance. A further £1m has been ear-marked for additional interpretive design work at the centre.

The Archaerium, a museum facility separate from the visitor centre, is designed by US architect Carlton Abbott & Partners, with exhibits developed by Haley Sharpe.

Nick Stead, interpretative designer at Haley Sharpe, says, ‘We were looking at those moments when worlds meet and at how the English, American Indian, European and African people became Americans.’