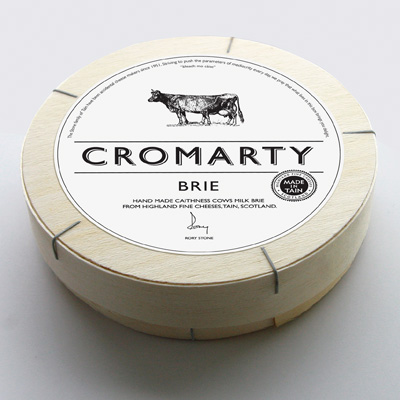 Glasgow-based consultancy Suisse Design has created packaging designs for a range of brie from cheesemaker Highland Fine Cheeses, which uses the motif of a six-legged animal.

Suisse founder Paul Gray says the consultancy was appointed around a month ago by Highland Fine Cheeses owner Rory Dodd. Dodd and Gray were introduced through a mutual contact.

Suisse was tasked with developing designs for a range of Cromarty brie that Highland Fine Cheeses wanted to launch in premium retailers.

Gray says the consultancy developed designs that would sit within the vernacular of cheese packaging, but would reference Dodd’s sense of humour. To do this it created an identity of a six-legged animal, and used the Gaelic tagline ’àileadh mo càise’ – which translates as ’sniff my cheese’.

Gray says, ’We did not want to make it radically different from other cheese packaging, as it would lose its provenance. The six-legged animal is clearly ridiculous, but because of its placement some people don’t automatically see it.’

There will be cow’s milk, goat’s milk and sheep’s milk variants of the cheeses, and the goat and sheep on the labels will also be six-legged. Each variant will have a different key colour, with the cow being black, the goat dark blue and the sheep colour yet to be decided.

The range will be launched at Ian Mellis, in Edinburgh and Glasgow, and Neal’s Yard, in London, before Christmas.