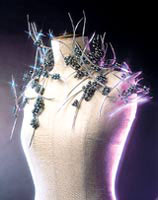 ‘We wanted the visitor to fall into the pages of a magazine of the future,’ says curator Claire Wilcox of the Victoria & Albert Museum’s Radical Fashion exhibition.

With this brief, Arnaud Dechelle of Event Communications had to work hard to recreate the fantasy atmosphere of catwalk shows within the prosaic spaces of the museum.

It is a journey through the world of 11 designers, all grouped under the radical tag, defined as a state of mind in which one is ‘rooted in their art’, but remains a visionary, pushing boundaries and seeking the expression of beauty.

Starting with a surrealism-inspired photograph of a gigantic eye, the visitor enters a ‘chronologically backwards-ordered’ series of conceptual tableaux, each representing an atmosphere and a style.

Hussein Chalayan’s sculptured creations are suspended in the air and a digital animation video in which futuristic-looking models wear his creations runs. Interestingly, the curator’s text is outside the exhibition space, so ‘the exploration for the work happens before, and then it’s guided by the knowledge to go further’, says Dechelle.

Sound pervades the whole exhibition, creating specific moods for each installation. Musician and sound curator David Toop has composed a track ‘that creates a floating world of quiet, sometimes almost imperceptible sound, that heightens the emotional response of the viewer’. It was made with help from collaborators such as BjÃ¶rk, Ryuichi Sakamoto and Max Estley.

Likewise, the video support is a major element of the design – Helmut Lang’s space features no clothes, but just three hours of footage of all his catwalks shows, while Alexander McQueen’s celebrated catwalk show in an East End bus depot is projected as a backdrop to a glass case, in which two mannequins wearing the clothes from that collection, recreate the show experience.

Some designers, or as Dechelle chooses to call them, ‘artists’, collaborated closely with the organisers of the exhibition.

Issye Miyake, for example, gave exact specifications of how large he wanted his installation space and even what colour to paint the floor. Miyake’s current A Piece of Cloth collection features tubes of computer program-patterned cloth, which when cut out by scissors, become ready-made garments. Other gems include dresses by the doyenne of radicalism, Vivienne Westwood, and Azzedine Alaia’s signature curvaceous creations, supported by invisible mannequins.

The lighting, by DHA Design Services, complements the theatrical nature of the show.

Radical Fashion is at the Victoria & Albert Museum, Cromwell Road, London SW7 from 18 October until 6 January 2002