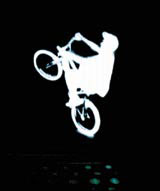 Recent design graduates looking for a role model could do worse than study the way young film-maker Ed Holdsworth has launched his career. Holdsworth is talented, likeable and very tall, with the easy charm of someone not overburdened with too much ego and self-importance. But in the current job market, it’s not enough to be a nice guy. You need more.

And Holdsworth has got it; he has energy, initiative and a small showreel of strikingly individualistic work, but it’s his willingness to chase every opportunity and to pursue every opening that is perhaps his most inspiring quality. And as a result of all this hard work – and what he describes as ‘taking lots of gambles’ – he is poised on the cusp of recognition as one of the brightest stars in moving image design.

Like many of today’s generation of digital film-makers, Holdsworth didn’t study film at college. He studied furniture and lighting design at Leeds, where he dabbled with computers, teaching himself Director and using it to create film loops. With no thought of becoming a film-maker, but by proffering his services wherever he saw an opportunity, he was invited to contribute to a Warp Records event, where his animations were used to accompany electronica-heroes Plaid.

In 2000, Holdsworth moved to London – a period when anyone who could rub two pixels together was earning a stockbroker’s salary designing websites, so he taught himself Macromedia Flash with the aim of becoming a Web designer. He wrote to 50 companies before he was spotted by Elliot Chaffer of Milk, who invited him to pitch some ideas to the fledgling E4.

One of Holdsworth’s ideas was chosen and he was commissioned to produce a lengthy sting called Static. Holdsworth made the entire sequence in Flash; to the casual observer it is indistinguishable from conventional animation. Holdsworth next submitted a script to The Mesh, Channel 4’s ‘cutting edge digital and interactive animation scheme’. Again he was successful, and a short film, Pylons, was commissioned – also made in Flash.

Despite the feather-in-the-cap of two high-profile commissions, Holdsworth found the next two years tough going. But yet again his persistence paid off when he was signed up by the well respected production company Passion Pictures. Executive producer Andrew Ruhemann recognised Holdsworth’s potential. ‘We came across Holdsworth’s work about a year ago at digital festival Onedotzero. Passion is best known as a character animation studio, so signing Holdsworth was a departure for us. He is more of a digital artist using moving images to create a very powerful and original graphic effect. I thought we’d be a good match for each other,’ says Ruhemann.

Despite being signed to Passion, Holdsworth had to keep on fighting for his breaks. He responded to an open invitation sent to Passion, and posted on the Internet, to submit ideas for videos to accompany tracks from the latest Radiohead album Hail to the Thief. Holdsworth’s treatment was liked, and a film was commissioned for the track Sit Down Stand Up. Holdsworth’s video, a dreamy journey through a liquid city (actually night-time Los Angeles) where buildings melt in a narcotic ebb and flow, perfectly mirrors the sonic drift of Radiohead.

The journey – or more accurately, ‘the drift’ – is a Holdsworth trademark. He uses every car journey or trip on public transport as a chance to shoot footage. You can see a record of his journey across Tokyo on the Narita Express in his Four Tet video for She Moves She. Holdsworth transforms the footage by using a series of finely judged effects and techniques. The result is a visionary journey through a futuristic dream-world metropolis.

Holdsworth acknowledges the help he’s received from his more-established brother, photographer Dan Holdsworth, famous for his pictures of deserted car parks at night. ‘Dan always encourages me to be myself,’ says his younger brother. ‘Whenever I can, I work with him as an assistant. Standing about in Belgian lorry parks at 2am is a great way to have ideas for my films.’

Holdsworth notes that with each job his confidence rises. He’s currently doing live visuals for DJ Dave Clarke. ‘Over the next two years,’ he says, ‘I want to make more promos and I’m not averse to commercial work.’ Ad agencies looking for the ‘next big thing’ should check out his showreel; graduates looking for that first job should be inspired by him.