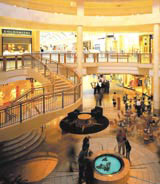 One of the more far-reaching effects of Birmingham’s glittering Bullring complex, which opened its doors earlier this month, is its influence on shopping centres across the UK. Paving the way for a new generation of urban retail developments, it could also spell the end of the traditional shopping mall.

Cities across the country are lining up to follow in the Bullring’s fresh footsteps. Plans are afoot in Liverpool, Bristol, Cardiff, Exeter and Sheffield, among others, to replicate Birmingham’s mix of high profile flagships, design-led public spaces and independent retailers in a city-centre location.

It’s great news for consumers, but less so for existing shopping centres. According to a report published earlier this month, they must increase their spending on refurbishment or risk losing business.

Property consultant Donaldsons, which published the report, says the amount invested in upgrading the UK’s shopping centres has ‘been at a low level for several years’.

‘The shopping centre has done well recently, compared with the high street stores. The market has carried it forward so it hasn’t needed to invest in refurbishment,’ says Donaldsons shopping centre investment partner Harvey Gifford.

But investment is vital if shopping malls are to retain their appeal and inspire consumers who may be tempted with other leisure activities, he says. The advent of urban ‘streetscapes’ like the Bullring, further raises the design bar for traditional shopping centres.

‘The Bullring is not a shopping centre in the usual sense,’ says Gifford. ‘It’s a futuristic streetscape, not a monolithic block painted white inside that closes its doors at 6pm. It’s the future of shopping centres,’ he ventures.

‘We are no longer talking about shopping centres, rather retail-led regeneration based on clear urban design principles,’ adds Andrew Ogg, vice-president of the British Council for Shopping Centres, and managing director of architect Leslie Jones.

Portland Design project director Alan Thompson agrees. He is working on a metropolitan shopping area for Barnsley, part of a wider regeneration of the town centre (DW 21 August).

The term ‘shopping centre’ is not applicable to such urban developments, he believes. ‘To most, it conjures up an indoor mall with two anchor tenants at either end, built as an easy, comfortable and convenient destination,’ he says. But these have led to the erosion of lively town-centre retail developments, Thompson believes.

‘What is needed now are inner-city sites that have greater respect for the existing historical fabric of town centres and an increased focus on public spaces,’ Thompson says. Portland’s work for Barnsley involves ‘creating streets, giving it a new sense of place where people can walk through, sit and relax in a genuine environment’.

This type of development is subject to increasingly tough aesthetic standards, as York local council found out to its cost last week. A planned city-centre shopping mall, the Coppergate Riverside scheme, was rejected by The Commission of Architecture and the Built Environment for low standards of design and insensitivity to its historic surroundings.

‘What had the making of a good scheme for York has been let down by a reluctance to insist on high standards of architecture and urban design,’ according to Cabe design review committee chairman Paul Finch.

Wider urban regeneration, from transport links to well-designed public spaces, is integral to retail ‘streetscapes’ such as the Bullring, says Jon Emery, UK development director at development company Hammerson, part of the alliance that led the Birmingham development. To that end, the company’s next project is the rejuvenation of Brent Cross shopping centre in the wider context of the rejuvenation of Cricklewood, north London.

‘The fundamentals of shopping mall design should still be followed by urban developments – such as anchor stores and clear sight-lines – but they must be flavoured with a strong transport infrastructure and public realm design,’ he says.

‘The Bullring shows the way schemes are heading. People enjoy coming into towns for an unsanitised shopping experience – the buzz, the sights, the smells. Any urban shopping development should retain certain key ingredients, but they should also be unique to each city, not formulaic,’ says Emery.

But what does the rise of urban ‘streetscapes’ mean for the future of the out-of-town shopping mall?

Suburban shopping centres such as Manchester’s Trafford Centre and Bluewater in Kent are already an endangered species, Gifford warns. ‘Changes in planning means the Government will no longer sanction out-of-town centres, particularly the size of Bluewater or Trafford. Their impact on town centres is too negative.’

It’s much more difficult to open out-of-town parks now, due to tougher restrictions, adds Emery. ‘Developers’ plans now have to pass tests to prove that a scheme can’t be done in an urban environment. And usually, they can.’

New-build sites may be facing extinction, but existing shopping centres are a proven, successful formula. As such, they should be able to exist alongside newer urban developments, Emery adds. ‘They are different experiences, and not exclusive.’

But shopping centres must look closely at their offerings, he says. ‘The challenge for out-of-town malls is to “re-energise” their experiences. A more diverse mix of retail, leisure activities and improved lighting should all be on the agenda for any refurbishment.’

‘[Bluewater] still offers an easy, convenient shopping environment, but people’s attitudes are changing. They want more individuality and authenticity and we have to respond to that,’ Hooker says.

An ever-evolving retail mix, improved landscaping and a greater focus on leisure activities go a long way to address this, he says. Bluewater’s Land Rover driving course typifies the style of activity – one that complements the shopping experience – the centre wants to focus on in future, says Hooker. And, because of space, it’s something urban complexes can’t possibly compete with.

The Trafford Centre is also addressing its retail mix. John Lewis announced last month it is to open a flagship there in 2005.

Its approach is exactly right, says Gifford. ‘Size gives these shopping centres the critical mass to do very well, and Bluewater and The Trafford Centre will continue to be enormously successful centres,’ he predicts.