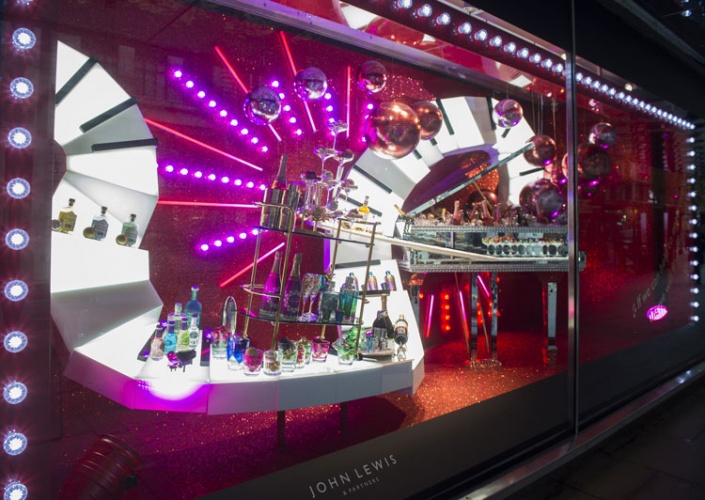 John Lewis is continuing its tradition of drawing on its Christmas advert as the theme for its window display, playing on the idea that a gift can be life-changing, as Elton John’s piano was for him.

A piano has provided the backdrop for the glittering display, designed in-house with super-sized glowing keys snaking their way through the series of windows creating a surface to show off products on.

In what the store says is “a first for the UK high street”, a minute-long musical light show is being projected from the windows every 30 minutes, playing Elton John’s Step Into Christmas.

The theme continues inside the flagship Oxford Street store, with an experiential, interactive space where customers can “step into the set of the advert” which has been rebuilt of the third floor. People can visit different scenes including the dressing room and recording studio, listen to Elton John’s music and take a photo at the piano. 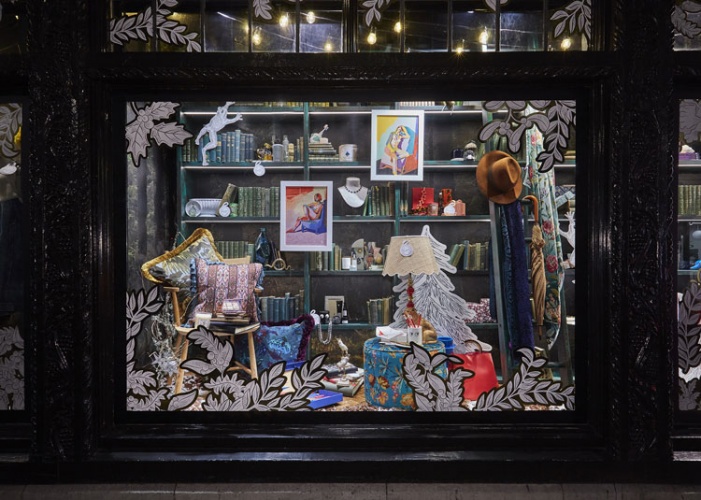 Animals carved into the panels of the store have been reimagined as two dimensional (2D) drawings as part of this year’s window display, “The Liberty Christmas Story”, designed in house.

The black and white prints of creatures including an owl, a monkey and a frog appear frolicking within colourful, three dimensional (3D) festive scenes set up as cosy, festive home scenarios filled with presents. The animals interact with the products – a monkey lifts a pair of shoes for example, while an elephant sits at the dinner table.

The theme continues in store with large hot air balloon hanging in the stores atrium, decorated with animal patterns and fairy lights, with more 2D animal prints “climbing” a ladder into the balloon’s basket.

The Liberty Christmas print, which has been hand drawn by Liberty fabric designer Ffrion Griffith, also appears on limited edition fabric items in store, as well in a Christmas at Liberty colouring book published by Harper Collins. 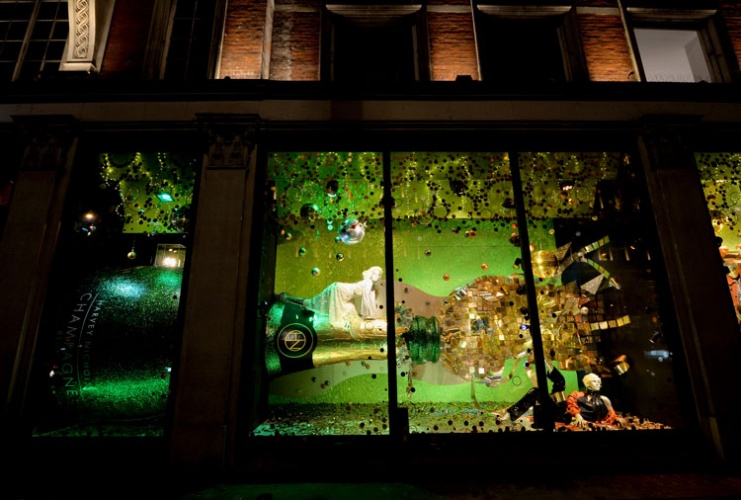 A super-sized cork pops from a giant champagne bottle in the Harvey Nichols windows, sending a wave of gold glitter through the rest of the display, which has been designed in-house. Mannequins and products intermingle with the stream of gold, surrounded by baubles set against a bright lime green background.

A section of the displays, is also dedicated to the new Disney film Mary Poppins Returns. Four original costumes from the film, designed by Sandy Powell, take pride of place in the windows, including a coat worn by Emily Blunt in her role as Mary.

Mary Poppins is known for travelling by umbrella. In the magical nanny’s honour, umbrellas appear in the windows as well as in the store, leading customers up to the fifth floor café, which has been decorated with a canopy of even more metallic umbrellas. 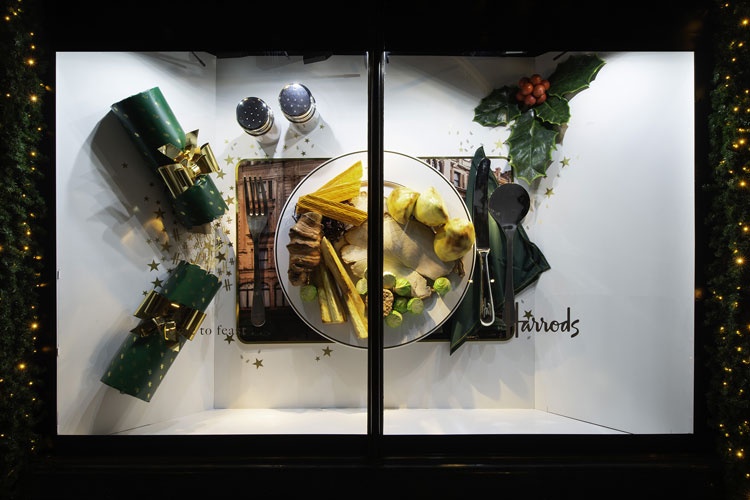 Harrods has centred its display, “Fantastica”, around festive rituals that take place throughout Christmas day, such as opening presents and eating Christmas dinner – with a fair amount of emphasis of festive food.

The Harrods visual merchandise team developed the concept and worked alongside a west London design studio which Harrods has not named, which crafted the pieces in the display.

Continuing the idea of family feasting, an eight-metre Christmas tree outside the store has been decorated with oversized tasty treats such as candy canes and cranberries.

The store, which is also celebrating the recent launch of its Fresh Market Hall, is holding a series of in store events it is calling 12 Moments of Fantastica, which include performances from musicians from the Royal Academy of Music and a Jo Malone wreath-making masterclass. 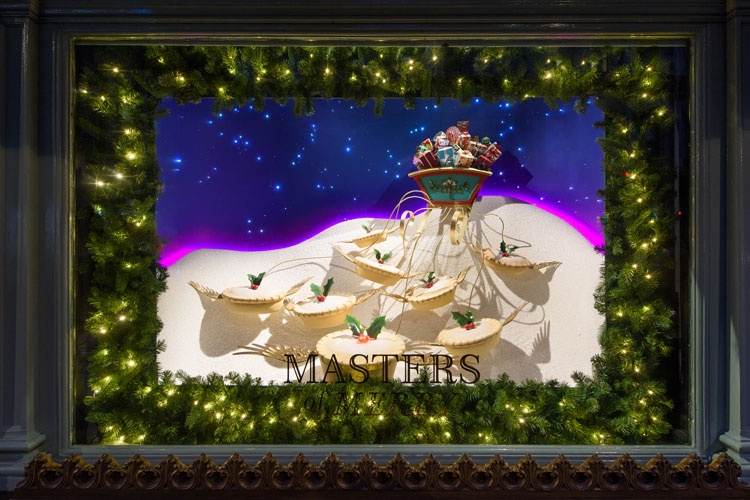 It appears super-sized tasty treats are a popular theme for windows this year, as
Fortnum and Mason’s Piccadilly windows present a dazzling display of festive food and drink.

Displays include a giant Christmas pudding with coins spilling out, a golden lobster surrounded by a circle prawns and mince pies pulling a sleigh. The displays are surrounded by green foliage with fairy lights and many come with moving elements.

The store’s Christmas slogan which appears on the windows is “Masters of Merry”, highlighting the brand’s history and that it has 311 years of experience when it comes to Christmas.

This theme is continued with the launch of Fortnum’s first ever Christmas film for digital and social channels, which speeds through some key events from the past three centuries, aiming to show that the Fortnum’s brand has been there for every Christmas throughout. 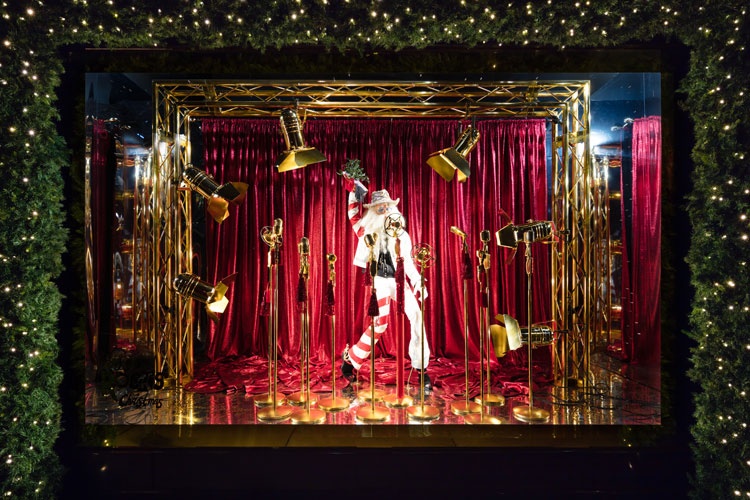 The store has opted for a “Selfridges Rocks Christmas” theme, with a “rock Santa” taking centre stage in its windows, which have been designed in house.

Some windows feature “Rock Santa” on stage against glittering backdrops surrounded by lights, while others are styled as “back stage” areas such as studios piled high with technology-based gifts and dressing rooms filled with clothes.

A highlight is a spiralling piano with more than 2,000 individual keys in a corner display, with a mannequin beside it taking on the role of Mrs Claus. Incidentally, it is hard not to note the similarities of this particular window to that of John Lewis, which has centred its whole display around a piano, but Selfridges says it is “the first department store in the world” this year to unveil its Christmas windows.

It took more than 100 people to put together the window displays, according to Selfridges. Inside, more than 85,000 baubles have been hung around the store, while 15,000 metres of LED lights have been brought in to add a bit of sparkle.

The illustrators and graphic artists to look out for in 2019