Walt Disney’s Mickey Mouse: The Ultimate History, has set out to be the “definitive book” on the world-famous cartoon character, charting his story from creation to now.

The 496-page Taschen title features over 1000 images and illustrations, including sketches, comics, animated artworks, merchandise images, TV appearances and behind-the-scenes shots, some of which have “never been seen”.

Daniel Kothenschulte, the editor of the publication who also wrote the introduction, says: “This is the first book that actually tells the whole history of Mickey Mouse as a film icon and a comic book hero. It is a parallel history.”

The book’s authors are David Gerstein, whose expertise is on the comic book side and “animation expert” J.B. Kaufman. Anna-Tina Kessler, art director at Taschen, structured and designed the book.

Mickey Mouse was created in 1928 by Walt Disney and Ub Iwerks, when he made his first black and white animated film appearance.

The Mickey Mouse comic strip was launched in 1930, originally written by Disney and drawn by Iwerks, but was soon taken over by Floyd Gottfredson who worked on it until 1975.

It features key moments in the character’s history such as early cartoons, Mickey’s appearances during World War II, the Mickey Mouse Club TV show, Disney films, his role at Disneyland theme park, and as a video game character.

“Walt Disney shaped Mickey in his own image,” Kothenschulte says. “He was always inspired by Disney’s own idealised self.

“In the beginning it was a hungry little fella who wanted to achieve everything himself. Through the years Mickey became more gentleman-like, rather than an anarchic figure. Then Donald Duck stepped in to become the more anarchic character.”

As well as many well-known and “historically important” images of the Disney mouse, Kothenschulte says: “We went into the archives again to find out about the unfinished projects which are sometimes more interesting than the finished ones. We are presenting hundreds of never-before-seen projects of Mickey Mouse.”

It is the pages of unseen work that Kothenschulte says are the “dearest” to him and the authors.

The trio worked on the book for around two years, scouring through the Walt Disney Archives, which contain written documents, screenplays, drawings, comics and more. They also searched Disney’s Animation Research Library in Glendale California.

“That is only accessible to artists, it is where the original artwork is stored,” Kothenschulte says. “There are around six million drawings stored there.”

They have worked with archivists to look in “unopened boxes” and to find out whether projects they heard “rumours” about existed.

“There is hardly anybody alive who worked with Walt Disney,” Kothenschulte says. “I had a list of unfinished projects from another researcher who died a few years ago. You can always ask an archivist but it is always better to know [what you’re asking for] exists.”

The book’s creators had seen “tens of thousands” during their research, narrowing them down to a “representative selection” of “historically important” and visually “beautiful” images.

“One of the unmade films would involve about 300 storyboard drawings, as well as so called inspirational sketches and paintings,” he says.

Highlights include drawings from unfinished animated films, with a work called Mickey’s Toothache, among Kothenschulte’s favourites.

“It is a surrealist film of Mickey experiencing a nightmare,” the book’s editor says. “It is a tiny Mickey in a giant mouth. These [drawings] were made by a Hungarian artist, Ferdinand Horvath. Disney in the early 1930s attracted all these European illustration artists, this guy is among the best.”

The book charts how the design of Mickey has changed over time, but he feels it is a 1930’s design, which is 2D, in colour, with black eyes that is seen as the most “iconic” and “classic”.

It is also the design most favoured in the fashion industry, he adds, with many retailers choosing it over more modern designs.

The book also highlight’s Mickey’s role as the Sorcerer’s Apprentice for Fantasia (1940), as “the most expensive Mickey film ever made”.

Kothenschulte believes Mickey’s enduring appeal comes down to the “visual beauty” of the design.

“If you want to explain why even toddlers respond to the face of Mickey Mouse instantly there is something in the design, that enduring an intuitive appeal that Mickey has on everybody.”

“The character, content-wise, I think is secondary to the success,” he says.

Taschen art director Kessler adds: “There is something about the way his outline is drawn, especially his ears, which make him so very recognisable.”

In terms of design, Kothenschulte says: “In a Taschen book every page is composed like an artwork, so visual aspects are really important.” 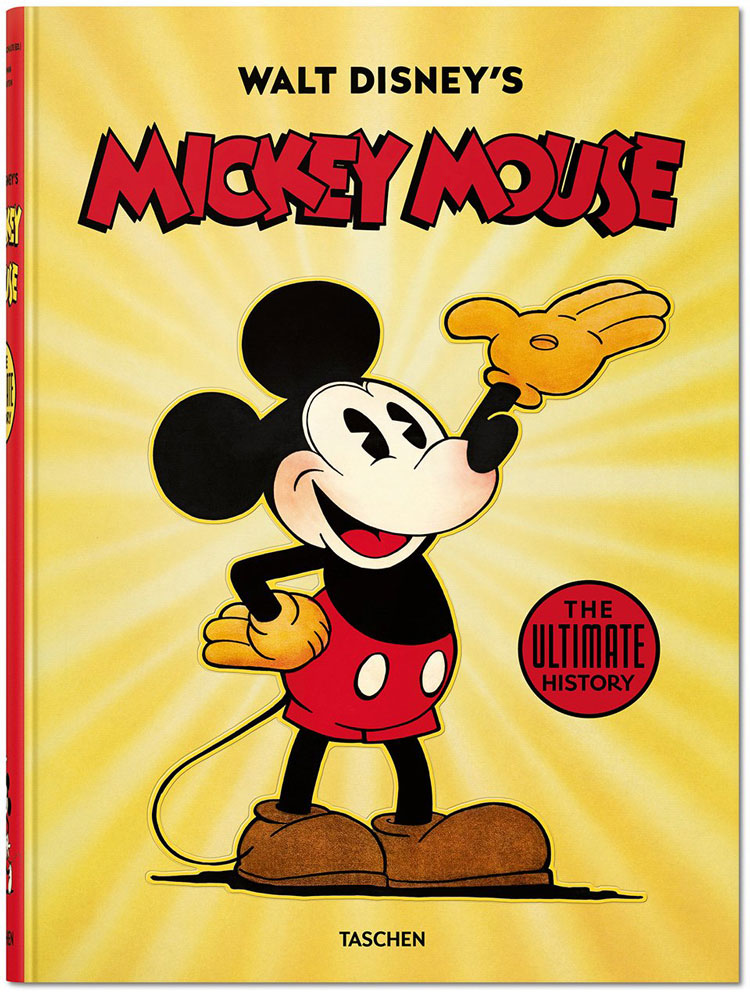 Kessler says it is important “to experience books using all the senses, especially the haptic (touch).”

“We have used a heavier, uncoated paper with a nice texture for the section openers,” she says. “The main part of the book uses a lighter paper stock, so you can really feel the difference.”

“All three section openers feature a model sheet of Mickey Mouse from each time period discussed in the chapters — which is nice as you can see how the character evolved over time.

Each section opener has a cut-out through which you can see the name of the section, such as “Golden Age”. 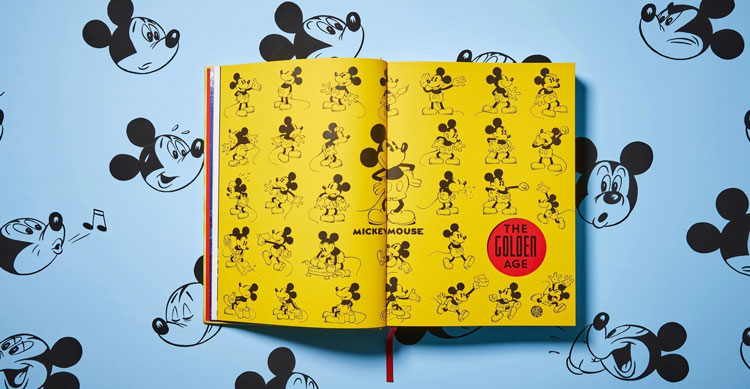 “The book is bound in a soft silk fabric and has a glossy tip-in on the front cover,” she adds.

Primary colours are used “to keep it clean” and typography in the book was inspired by Mickey Mouse material from the 1930s. “We collaborated with two Italian designers on custom drawing the type for it,” Kessler says.

Walt Disney’s Mickey Mouse: The Ultimate History is available to buy from December from Taschen for £150.

All images courtesy of Taschen. 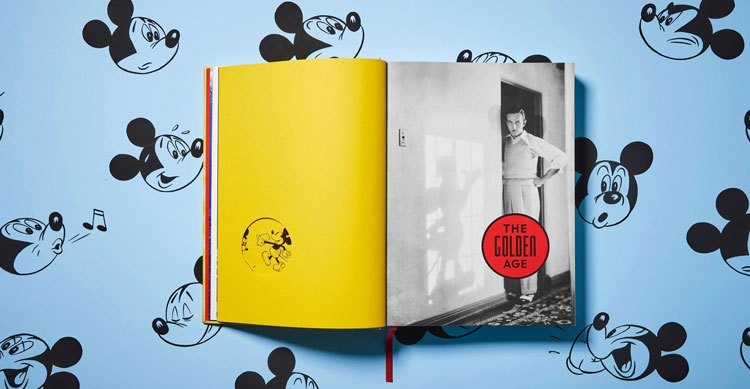 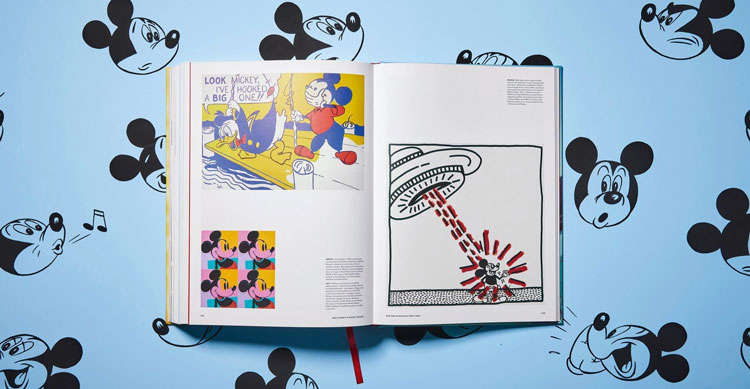