“The pandemic has shown that in times of crisis, inequality along the lines of gender, race and class becomes all the more severe,” says Dr Mercedes Aguirre, a curator at the British Library.

She is working on the opening of the library’s latest blockbuster exhibition exploring the historical and ongoing fight for women’s rights in the UK.

Unfinished Business was initially due to open in April of this year, but owing to the coronavirus pandemic it was delayed. Now seven months into the crisis, as organisers look to debut the show after months of political unrest and protest around the world, she says its subject matter has only grown in relevance. 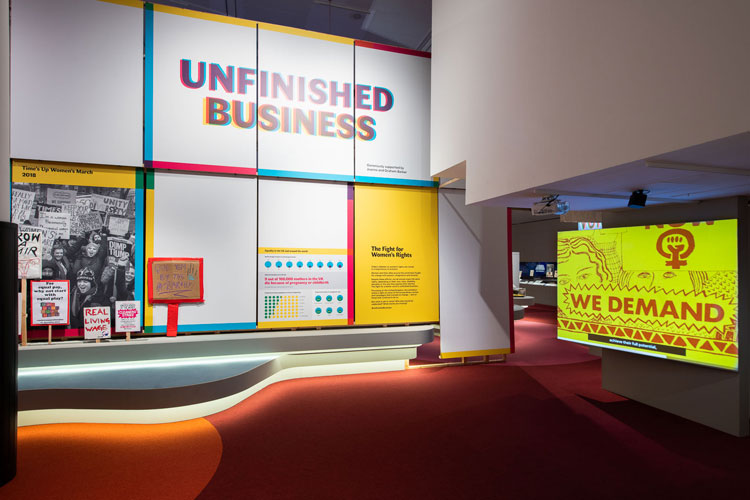 From Pankhurst to Page Three

The showcase is split into three parts – Body, Mind and Voice – and each has been conceptualised by London-based environmental designers Plaid and graphic designers Lombaert Studio. The collaborators have previously worked on several other exhibitions with the British Library.

All three sections feature a range of different artefacts that represent strands of different feminist movements throughout history. The offer includes the protest poems written on toilet paper by suffragette Sylvia Pankhurst during her time in Holloway Prison, a first edition copy of Mary Wollstonecraft’s A Vindication of the Rights of Woman, a No More Page Three campaign t-shirt and Jameela Jamil’s smashed weighing scales.

The subject matter is characteristically diverse and wide-ranging. As a result, Plaid co-director Lauren Scully says the main focus of the team was to bring together “all of these seemingly random elements in a cohesive way”. 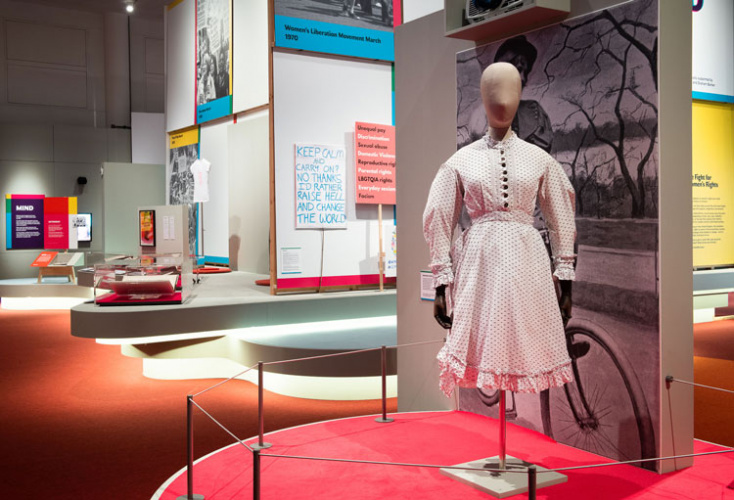 “There has never been one united movement”

The exhibition begins with the Body section. Here visitors are introduced to the various fights waged on women’s bodies, with conversations tackling nudity, menstruation, abortion and clothing being highlighted.

Mind explores the intellectual challenges posed to women and their exclusion from many part of society. Finally, Voice is a celebration of how women have historically fought their oppressors and spoken out about their lot. A particular focus is given throughout as to how the topics covered intersect with other oppressions like racism, homophobia and ableism and class.

All three sections are delineated by a graphic system devised by Lombaert. The names of each section are projected above eye-level using a set of three primary colours. When these colours overlap in the typography, they create three new colours.

“This transparent colour approach was used to show how the different feminist movements over the years influence and intersect each other and create new things where others existed,” Margot Lombaert, founder of the studio, tells Design Week. “There has never been one united movement, but rather lots of little ones that learn from each other.” 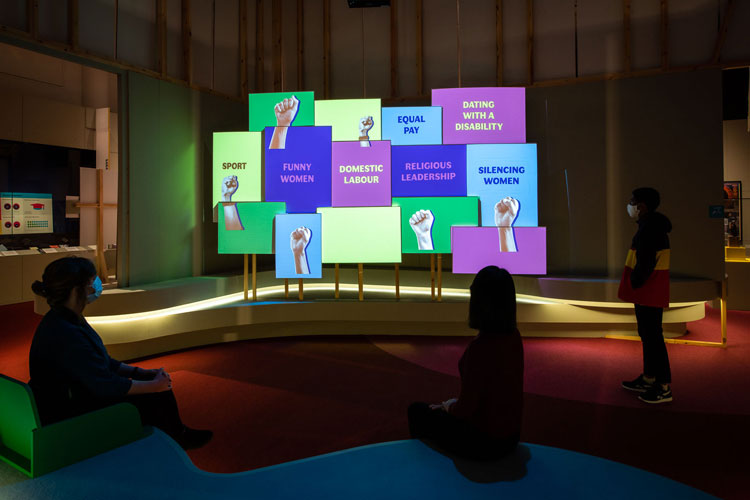 At the heart of the exhibition is a dedicated “media space”, devised by Plaid and Lombaert. Prior to the pandemic, it was intended to be a meeting space, wherein visitors could spend any amount of time watching the animations and videos within and perhaps even strike up a dialogue with each other.

The audio-visual elements themselves have been created in collaboration with Lombaert and London-based digital design studio Clay Interactive. The series of short films, addressing areas like women in comedy and dating with disability, are projected onto a specially-made board designed to look like a collection of protest placards.

“Unfortunately, now we have to contend with social distancing, we’re likely to not get the same density of audience we were hoping for,” says Brian Studak, Plaid’s other co-director. “But we’ve still made it feel like a very social space.” 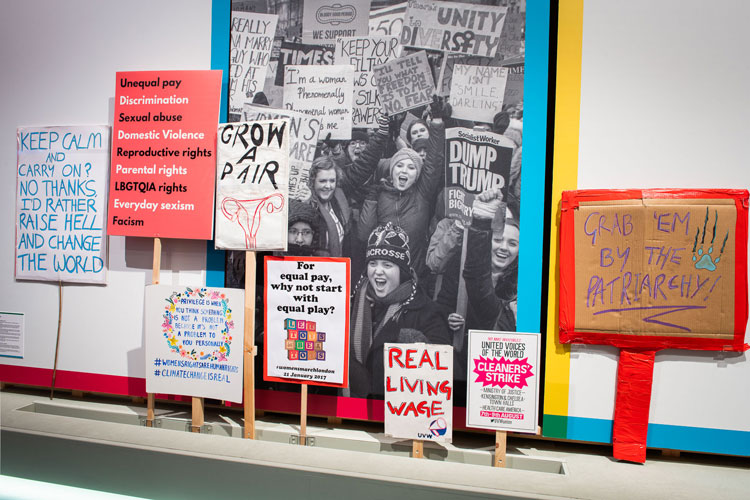 “Face-to-face with the activists”

While elements of the exhibition are light-hearted and empowering, both Scully and Lombaert highlight that other artefacts come with a much darker backstory. As a result, the team says their intention was to compliment different areas with a “soft and welcoming” physical space.

The sharp edges of the placard projection board are set alongside the soft curves of the tiered seating area, for example. And elsewhere, to evoke a sense of community and shared experience, walls are plastered with blown-up, “human-scale” pictures of protests throughout history.

“We wanted visitors to feel as if they were face-to-face with the activists and like they’re part of the protests,” says Lombaert.

Scully adds: “Our whole aesthetic was supposed to look semi-DIY – the aim was to marry that rough and ready look with something a bit more polished and embracing.” 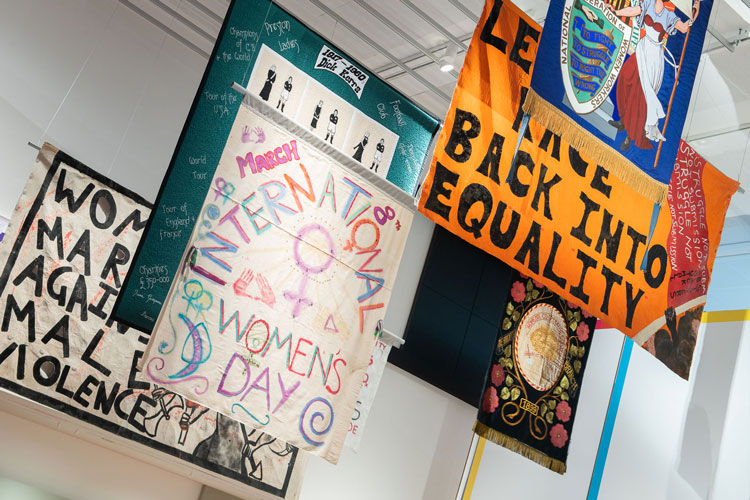 “As simple as possible”

The overarching intention behind the design is movement, the team says. By its nature, the exhibition is made up in part of many “static” objects – books and posters, for example.

But while these artefacts may not move in a conventional sense, Scully says there was a mission to depict the energy of the movements they represent.

“There’s a lot of reading within the exhibition because of the nature of what’s on show so our job was to make sure the space was engaging,” she says.

Reading is therefore interspersed with other offerings, such as costumed and clothing, audio-visual interviews and the large-scale protest imagery. Additionally, making use of the exhibition space’s high ceilings, various activist banners have been hung above.

And Lombaert has worked closely with the British Library to also supplement the information with a series of infographics, which can be found on the walls at various points. She says these have been designed to be “as simple and accessible as possible”, with topics covered including the number of women elected into parliament and the number of women graduating in science and technology subjects. 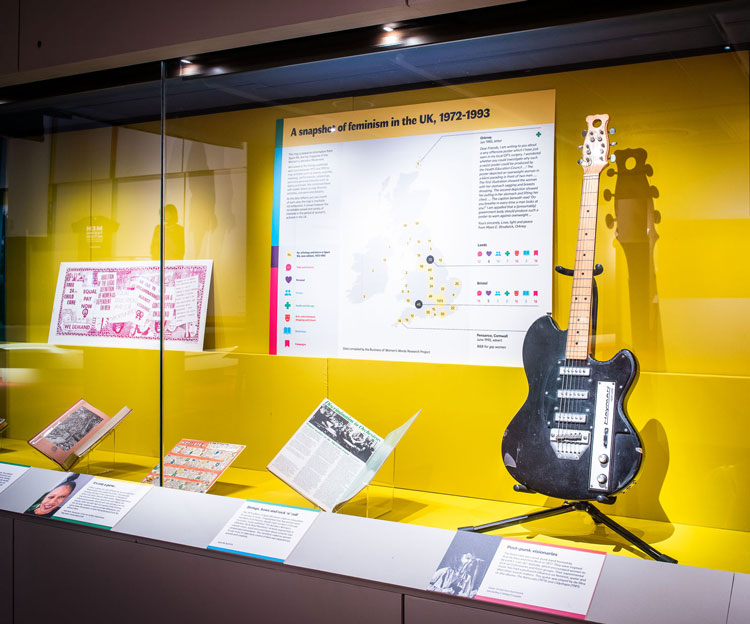 As with all exhibitions on display during the pandemic, some changes have had to be made to Unfinished Business to ensure it is COVID compliant.

Audio-visual elements using iPads and headphones have had to be adapted and an interactive participatory element designed for the closing stage of the exhibition has had to be removed.

Instead, a lot of the interactive elements have moved online. At the end of the exhibition, visitors are prompted with a series of questions and asked to continue the conversation online. Other online features include a series of teacher and children’s resources, a podcast series and a number of filmed interviews with the likes of Dolly Parton, Gloria Steinem and Emeritus nursing professor Elizabeth Anionwu.

Unfinished Business: The Fight for Women’s Rights opens at the British Library on 23 October. Tickets must be booked in advance. For more information, head here. 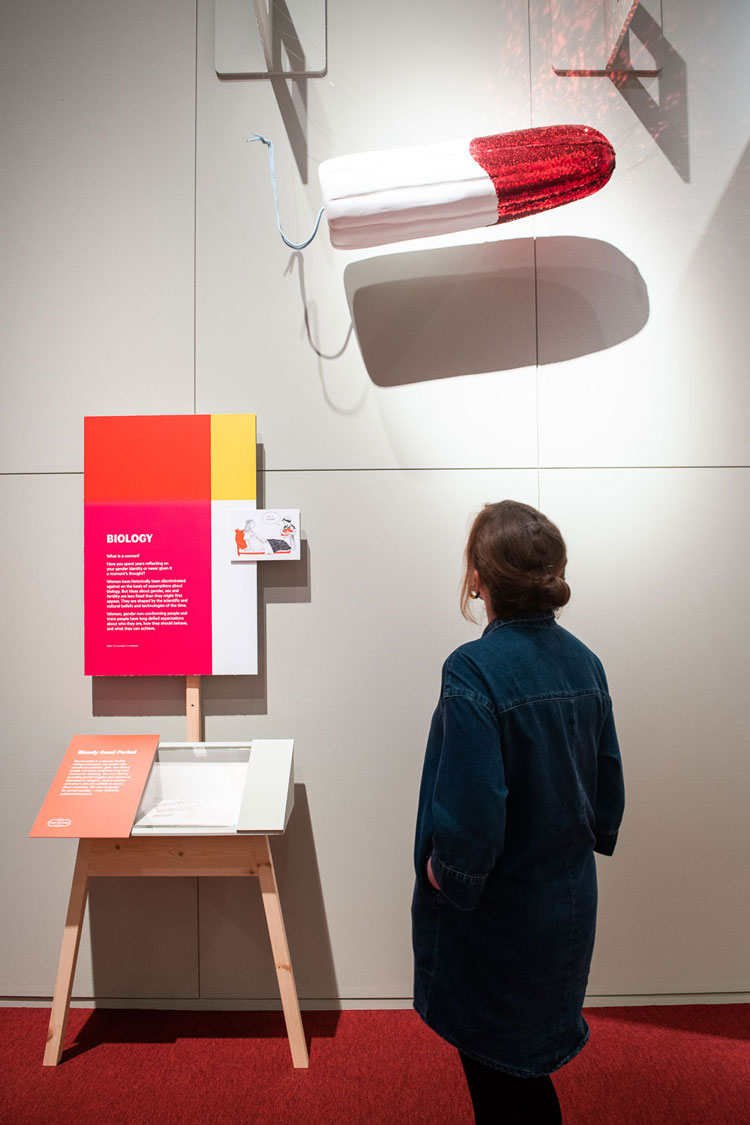 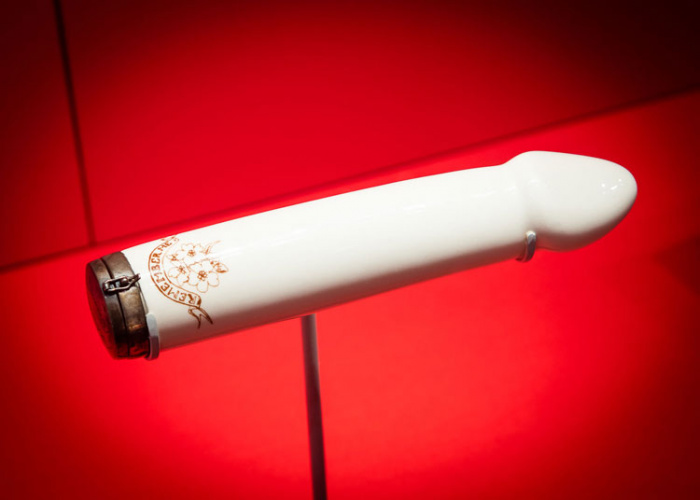 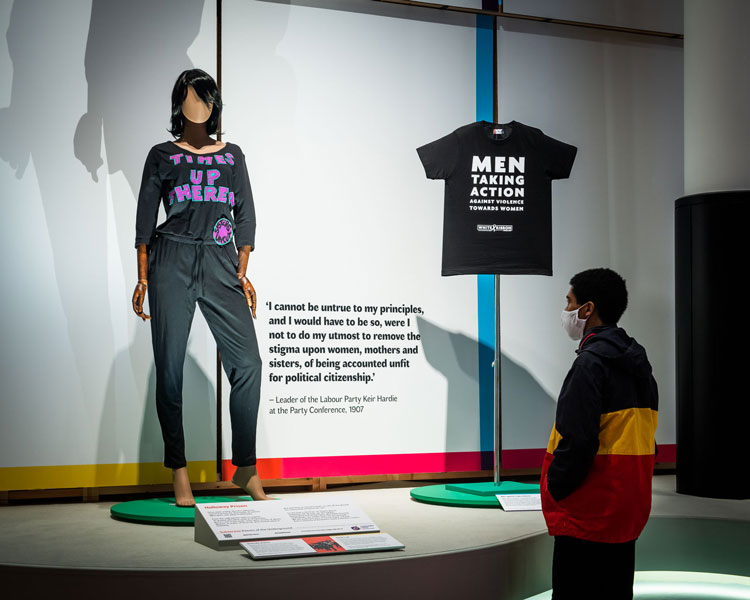 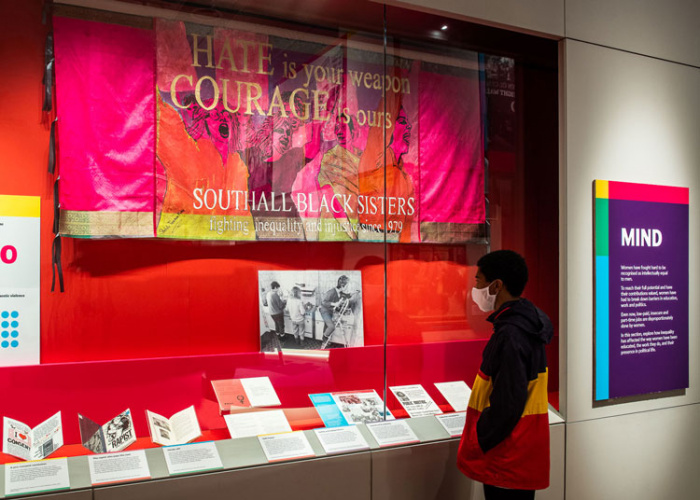