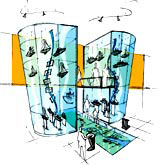 Redman Design has been selected to create interiors and displays for Newcastle-upon-Tyne’s £10m Museum of the Tyne, which will form part of the city’s Discovery Museum.

The design consultancy was appointed after a five-way credentials pitch against Event Communications, Land Design Studio, At Large and Haley Sharpe.

Museum of the Tyne, due to open in 2003, will consist of a collection of three galleries and one temporary exhibition space. It is designed to raise local people’s awareness of, and stimulate interest in their history by telling the story of the area’s industrial heritage.

The three permanent spaces will feature separate themes. One gallery, entitled “Story of the Tyne”, will trace early settlers to modern-day inhabitants. “The Spirit of Tyneside” focuses on industrialisation, innovation and development. And “Working Lives” examines the social development of the area.

Redman has been briefed to create the interior, the display areas and the interactive installations, says Redman partner Bryn Redman. Branding of the museum could form part of its work but it is still too early to say, he adds.

Furneaux Stewart has been shortlisted to work on the Imperial War Museum’s permanent exhibition, Genocide, which opens in autumn 2002. The consultancy is one of four shortlisted to take part in a paid pitch in May or June, for which they will be briefed next month.

She says the museum was hoping to attract larger consultancies because of the intellectual challenge of the exhibition.